The Adventures of Danny Meadow Mouse 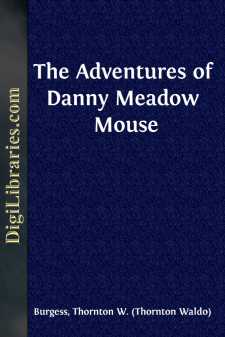 Danny Meadow Mouse sat on his doorstep with his chin in his hands, and it was very plain to see that Danny had something on his mind. He had only a nod for Jimmy Skunk, and even Peter Rabbit could get no more than a grumpy “Good morning.” It wasn't that he had been caught napping the day before by Reddy Fox and nearly made an end of. No, it wasn't that. Danny had learned his lesson, and Reddy would never catch him again. It wasn't that he was all alone with no one to play with. Danny was rather glad that he was alone. The fact is, Danny Meadow Mouse was worried.

You know, some people let their looks make them miserable. They worry because they are homely or freckled, or short or tall, or thin or stout, all of which is very foolish. And Danny Meadow Mouse was just as foolish in worrying because his tail was short.

It is short! It certainly is all of that! Danny never had realized how short until he chanced to meet his cousin Whitefoot, who lives in the Green Forest. He was very elegantly dressed, but the most imposing thing about him was his long, slim, beautiful tail. Danny had at once become conscious of his own stubby little tail, and he had hardly had pride enough to hold his head up as became an honest Meadow Mouse. Ever since, he had been thinking and thinking, and wondering how his family came to have such short tails. Then he grew envious and began to wish and wish and wish that he could have a long tail like his cousin Whitefoot.

He was so busy wishing that he had a long tail that he quite forgot to take care of the tail he did have, and he pretty nearly lost it and his life with it. Old Whitetail the Marsh Hawk spied Danny sitting there moping on his doorstep, and came sailing over the tops of the meadow grasses so softly that he all but caught Danny. If it hadn't been for one of the Merry Little Breezes, Danny would have been caught. And all because he was envious. It's a bad, bad habit.

All Danny Meadow Mouse could think about was his short tail. He was so ashamed of it that whenever anyone passed, he crawled out of sight so that they should not see how short his tail was. Instead of playing in the sunshine as he used to do, he sat and sulked. Pretty soon his friends began to pass without stopping. Finally one day old Mr. Toad sat down in front of Danny and began to ask questions.

“I don't suppose there really is anything the matter, but what do you think is the matter?” said old Mr....