The Adventures of Buster Bear 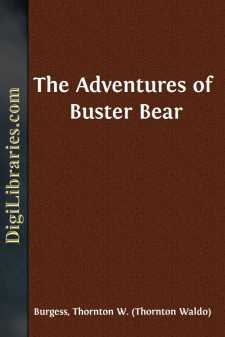 Buster Bear yawned as he lay on his comfortable bed of leaves and watched the first early morning sunbeams creeping through the Green Forest to chase out the Black Shadows. Once more he yawned, and slowly got to his feet and shook himself. Then he walked over to a big pine-tree, stood up on his hind legs, reached as high up on the trunk of the tree as he could, and scratched the bark with his great claws. After that he yawned until it seemed as if his jaws would crack, and then sat down to think what he wanted for breakfast.

While he sat there, trying to make up his mind what would taste best, he was listening to the sounds that told of the waking of all the little people who live in the Green Forest. He heard Sammy Jay way off in the distance screaming, "Thief! Thief!" and grinned. "I wonder," thought Buster, "if some one has stolen Sammy's breakfast, or if he has stolen the breakfast of some one else. Probably he is the thief himself."

He heard Chatterer the Red Squirrel scolding as fast as he could make his tongue go and working himself into a terrible rage. "Must be that Chatterer got out of bed the wrong way this morning," thought he.

He heard Blacky the Crow cawing at the top of his lungs, and he knew by the sound that Blacky was getting into mischief of some kind. He heard the sweet voices of happy little singers, and they were good to hear. But most of all he listened to a merry, low, silvery laugh that never stopped but went on and on, until he just felt as if he must laugh too. It was the voice of the Laughing Brook. And as Buster listened it suddenly came to him just what he wanted for breakfast.

He shuffled along over to the Laughing Brook, and straight to a little pool of which he knew, and as he drew near he took the greatest care not to make the teeniest, weeniest bit of noise. Now it just happened that early as he was, some one was before Buster Bear. When he came in sight of the little pool, who should he see but another fisherman there, who had already caught a fine fat trout. Who was it? Why, Little Joe Otter to be sure. He was just climbing up the bank with the fat trout in his mouth. Buster Bear's own mouth watered as he saw it. Little Joe sat down on the bank and prepared to enjoy his breakfast. He hadn't seen Buster Bear, and he didn't know that he or any one else was anywhere near.

Buster Bear tiptoed up very softly until he was right behind Little Joe Otter. "Woof, woof!" said he in his deepest, most grumbly-rumbly voice. "That's a very fine looking trout. I wouldn't mind if I had it myself."

Little Joe Otter gave a frightened squeal and without even turning to see who was speaking dropped his fish and dived headfirst into the Laughing Brook. Buster Bear sprang forward and with one of his big paws caught the fat trout just as it was slipping back into the water.