The Adventures of Akbar 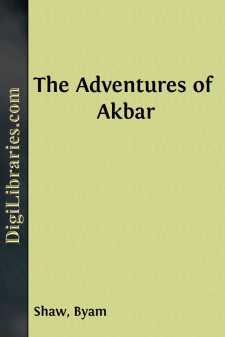 These queer-looking, queer-sounding words, which in Arabic mean "thanks be to God," were shrilled out at the very top of Head-nurse's voice. Had she been in a room they would have filled it and echoed back from the walls; for she was a big, deep-chested woman. But she was only in a tent; a small tent, which had been pitched in a hurry in an out-of-the-way valley among the low hills that lead from the wide plains of India to Afghanistan. For Head-nurse's master and mistress, King Humâyon and Queen Humeeda, with their thirteen months' old little son, Prince Akbar, were flying for their lives before their enemies. And these enemies were led by Humâyon's own brothers, Prince Kumran, Askurry and Hindal. It is a long story, and a sad story, too, how Humâyon, so brave, so clever, so courteous, fell into misfortune by his own fault, and had to fly from his beautiful palaces at Delhi and wander for years, pursued like a hare, amid the sandy deserts and pathless plains of Western India. And now, as a last resource, his followers dwindled to a mere handful, he was making a desperate effort to escape over the Persian border and claim protection at the hands of Persia's King.

So the poor tent was ragged and out at elbows, for all that it was made of costly Kashmir shawls, and that its poles were silver-gilt.

But Head-nurse's "Thanks be to God!" came from a full heart.

"What is it? What is it?" called an anxious voice from behind the curtain which divided the tent in two.

"What?" echoed Head-nurse in high glee. "Only this: His Imperial Highness, Prince Akbar, the Admired-of-the-World, the Source-of-Dignity, the Most-Magnificent-Person-of-the-Period—" She went on, after her wont, rolling out all the titles that belonged of right to the little Prince, until the soft, anxious voice lost patience and called again, "Have done—have done; what is it? Heaven save he hath not been in danger."

Head-nurse, stopped in her flow of fine words, sniffed contemptuously. "Danger! with me to guard him? No! 'Tis that the High-in-Pomp hath cut his first real back tooth! He can eat meat! He has come to man's estate! He is no longer dependent upon milk diet." Here she gave a withering glance at the gentle looking woman who was Baby Akbar's wet-nurse, who, truth to tell, was looking just a little sad at the thought that her nursling would soon leave her consoling arms.

"Heavens!" exclaimed the voice from within, "say you so?" And the next instant the curtain parted, and there was Queen Humeeda, Baby Akbar's mother, all smiling and eager.

Now, if you want to know what she was like, you must just think of your own dearest dear mummie. At least that was what she seemed to little Prince Akbar, who, at the sight of her, held out his little fat arms and crowed, "Amma! Amma!" Now, this, you will observe, is only English "Ma-Ma" arranged differently; from which you may guess that English and Indian children are really very much alike.

And Queen Humeeda took the child and kissed him and hugged him just as any English mother would have done. Head-nurse, however, was not a bit satisfied with this display of affection. That would have been the portion of any ordinary child, and Baby Akbar was more than that: he was the heir apparent to the throne of India! If he had only been in the palaces that belonged to him, instead of in a miserable tent, there would have been ceremonials and festivities and fireworks over this cutting of a tooth! Aye! Certainly fireworks. But how could one keep up court etiquette when royalty was flying for its life? Impossible! Why, even her determination that, come what might, a royal umbrella must be held over the blessed infant during their perilous journeys had very nearly led to his being captured!

Despite this recollection, as she listened impatiently to the cooings and gurglings, she turned over in her mind what she could do to commemorate the occasion. And when pretty Queen Humeeda (thinking of her husband, the king, who, with his few followers, had ridden off to see if a neighboring chief would help them) said, "This will be joyful news wherewith to cheer my lord on his return," Head-nurse's irritation found voice....