The Adventures of a Three-Guinea Watch 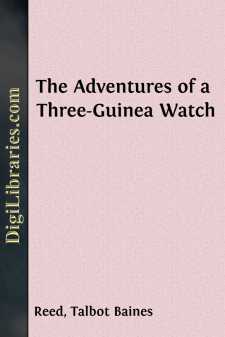 Chapter One. My infancy and education—How I was sold and who bought me.

“Then you can guarantee it to be a good one to go?”

“You couldn’t have a better, sir.”

“And it will stand a little roughish wear, you think?”

These few sentences determined my destiny, and from that moment my career may be said to have begun.

I am old, and run down, and good for nothing now; but many a time do I find my thoughts wandering back to this far-off day; and remembering all that has befallen me since that eventful moment, I humbly hope my life has not been one to disgrace the good character with which I went out into the world.

I was young at the time, very young—scarcely a month old. Watches however, as every one knows, are a good deal more precocious in their infancy than human beings. They generally settle down to business as soon as they are born, without having to spend much of their time either in the nursery or the schoolroom.

Indeed, after my face and hands had once been well cleaned, and a brand-new shiny coat had been put on my back, it was years before I found myself again called upon to submit to that operation which is such a terror to all mortal children.

As to my education, it lasted just a week; and although I am bound to say, while it lasted, it was both carefully and skilfully managed, I did not at all fancy the discipline I was subjected to in the process. I used to be handed over to a creature who took me up and examined me (as if he were a policeman and a magistrate combined), and according as I answered his questions he exclaimed, “You’re going too fast,” or “You’re going too slow,” and with that he set himself to “regulate” me, as he called it. I was ordered to turn round, take off my coat, and submit my poor shoulders to his instrument of correction. But why need I describe this experience to boys? They know what “regulating” means as well as I do!

Well in due time I profited by the instructions received, and one day my tutor, after the usual examination, grumpily told me, “You’re right at last; you can go.” And I did go, and I’ve been going ever since.

The troubles of my infancy however were not all over. I discovered at a very early age that the one thing a watch is never allowed to do is to go to sleep. They’d as soon think of leaving an infant to starve as of letting a watch go to sleep.

But to my story. Ever since I had left school—or, in other words, gone through my due course of regulation—I had remained shut up under a glass-case, lying comfortably upon a bed of purple velvet, and decorated with a little white label bearing the mysterious inscription, “Only Three Guineas.” From this stately repose I was only once a day disturbed in order to be kept from sleeping, and had all the rest of my time to look about me and observe what went on in the world in which I found myself.

It was not a big world indeed, but I could see I was not the only inhabitant....