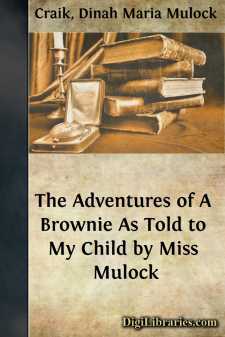 THERE was once a little Brownie, who lived—where do you think he lived? in a coal-cellar.

Now a coal-cellar may seem a most curious place to choose to live in; but then a Brownie is a curious creature—a fairy, and yet not one of that sort of fairies who fly about on gossamer wings, and dance in the moonlight, and so on. He never dances; and as to wings, what use would they be to him in a coal-cellar? He is a sober, stay-at-home, household elf—nothing much to look at, even if you did see him, which you are not likely to do—only a little old man, about a foot high, all dressed in brown, with a brown face and hands, and a brown peaked cap, just the color of a brown mouse. And, like a mouse, he hides in corners—especially kitchen corners, and only comes out after dark when nobody is about, and so sometimes people call him Mr. Nobody.

I said you were not likely to see him. I never did, certainly, and never knew any body that did; but still, if you were to go into Devonshire, you would hear many funny stories about Brownies in general, and so I may as well tell you the adventures of this particular Brownie, who belonged to a family there; which family he had followed from house to house, most faithfully, for years and years.

A good many people had heard him—or supposed they had—when there were extraordinary noises about the house; noises which must have come from a mouse or a rat—or a Brownie. But nobody had ever seen him except the children—the three little boys and three little girls—who declared he often came to play with them when they were alone, and was the nicest companion in the world, though he was such an old man—hundreds of years old! He was full of fun and mischief, and up to all sorts of tricks, but he never did any body any harm unless they deserved it.

Brownie was supposed to live under one particular coal, in the darkest corner of the cellar, which was never allowed to be disturbed. Why he had chosen it nobody knew, and how he lived there, nobody knew either, nor what he lived upon. Except that, ever since the family could remember, there had always been a bowl of milk put behind the coal-cellar door for the Brownie's supper. Perhaps he drank it—perhaps he didn't: anyhow, the bowl was always found empty next morning. The old Cook, who had lived all her life in the family, had never forgotten to give Brownie his supper; but at last she died, and a young cook came in her stead, who was very apt to forget every thing. She was also both careless and lazy, and disliked taking the trouble to put a bowl of milk in the same place every night for Mr. Nobody. "She didn't believe in Brownies," she said; "she had never seen one, and seeing's believing." So she laughed at the other servants, who looked very grave, and put the bowl of milk in its place as often as they could, without saying much about it.

But once, when Brownie woke up, at his usual hour for rising—ten o'clock at night, and looked round in search of his supper—which was, in fact, his breakfast—he found nothing there. At first he could not imagine such neglect, and went smelling and smelling about for his bowl of milk—it was not always placed in the same corner now—but in vain....