The Adventure of the Red Circle 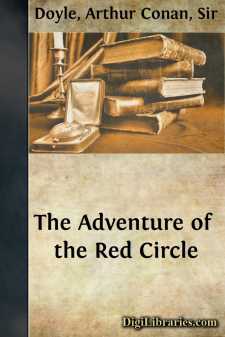 "Well, Mrs. Warren, I cannot see that you have any particular cause for uneasiness, nor do I understand why I, whose time is of some value, should interfere in the matter. I really have other things to engage me." So spoke Sherlock Holmes and turned back to the great scrapbook in which he was arranging and indexing some of his recent material.

But the landlady had the pertinacity and also the cunning of her sex. She held her ground firmly.

"You arranged an affair for a lodger of mine last year," she said--"Mr. Fairdale Hobbs."

"But he would never cease talking of it--your kindness, sir, and the way in which you brought light into the darkness. I remembered his words when I was in doubt and darkness myself. I know you could if you only would."

Holmes was accessible upon the side of flattery, and also, to do him justice, upon the side of kindliness. The two forces made him lay down his gum-brush with a sigh of resignation and push back his chair.

"Well, well, Mrs. Warren, let us hear about it, then. You don't object to tobacco, I take it? Thank you, Watson--the matches! You are uneasy, as I understand, because your new lodger remains in his rooms and you cannot see him. Why, bless you, Mrs. Warren, if I were your lodger you often would not see me for weeks on end."

"No doubt, sir; but this is different. It frightens me, Mr. Holmes. I can't sleep for fright. To hear his quick step moving here and moving there from early morning to late at night, and yet never to catch so much as a glimpse of him--it's more than I can stand. My husband is as nervous over it as I am, but he is out at his work all day, while I get no rest from it. What is he hiding for? What has he done? Except for the girl, I am all alone in the house with him, and it's more than my nerves can stand."

Holmes leaned forward and laid his long, thin fingers upon the woman's shoulder. He had an almost hypnotic power of soothing when he wished. The scared look faded from her eyes, and her agitated features smoothed into their usual commonplace. She sat down in the chair which he had indicated.

"If I take it up I must understand every detail," said he. "Take time to consider. The smallest point may be the most essential. You say that the man came ten days ago and paid you for a fortnight's board and lodging?"

"He asked my terms, sir. I said fifty shillings a week. There is a small sitting-room and bedroom, and all complete, at the top of the house."

"He said, 'I'll pay you five pounds a week if I can have it on my own terms.' I'm a poor woman, sir, and Mr. Warren earns little, and the money meant much to me. He took out a ten-pound note, and he held it out to me then and there. 'You can have the same every fortnight for a long time to come if you keep the terms,' he said. 'If not, I'll have no more to do with you.'

"Well, sir, they were that he was to have a key of the house. That was all right. Lodgers often have them. Also, that he was to be left entirely to himself and never, upon any excuse, to be disturbed."

"Nothing wonderful in that, surely?"