The Adventure of the Cardboard Box 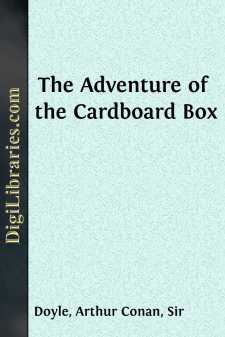 In choosing a few typical cases which illustrate the remarkable mental qualities of my friend, Sherlock Holmes, I have endeavoured, as far as possible, to select those which presented the minimum of sensationalism, while offering a fair field for his talents. It is, however, unfortunately impossible entirely to separate the sensational from the criminal, and a chronicler is left in the dilemma that he must either sacrifice details which are essential to his statement and so give a false impression of the problem, or he must use matter which chance, and not choice, has provided him with. With this short preface I shall turn to my notes of what proved to be a strange, though a peculiarly terrible, chain of events.

It was a blazing hot day in August. Baker Street was like an oven, and the glare of the sunlight upon the yellow brickwork of the house across the road was painful to the eye. It was hard to believe that these were the same walls which loomed so gloomily through the fogs of winter. Our blinds were half-drawn, and Holmes lay curled upon the sofa, reading and re-reading a letter which he had received by the morning post. For myself, my term of service in India had trained me to stand heat better than cold, and a thermometer at ninety was no hardship. But the morning paper was uninteresting. Parliament had risen. Everybody was out of town, and I yearned for the glades of the New Forest or the shingle of Southsea. A depleted bank account had caused me to postpone my holiday, and as to my companion, neither the country nor the sea presented the slightest attraction to him. He loved to lie in the very center of five millions of people, with his filaments stretching out and running through them, responsive to every little rumour or suspicion of unsolved crime. Appreciation of nature found no place among his many gifts, and his only change was when he turned his mind from the evil-doer of the town to track down his brother of the country.

Finding that Holmes was too absorbed for conversation I had tossed side the barren paper, and leaning back in my chair I fell into a brown study. Suddenly my companion's voice broke in upon my thoughts:

"You are right, Watson," said he. "It does seem a most preposterous way of settling a dispute."

"Most preposterous!" I exclaimed, and then suddenly realizing how he had echoed the inmost thought of my soul, I sat up in my chair and stared at him in blank amazement.

"What is this, Holmes?" I cried. "This is beyond anything which I could have imagined."

He laughed heartily at my perplexity.

"You remember," said he, "that some little time ago when I read you the passage in one of Poe's sketches in which a close reasoner follows the unspoken thoughts of his companion, you were inclined to treat the matter as a mere tour-de-force of the author. On my remarking that I was constantly in the habit of doing the same thing you expressed incredulity."

"Perhaps not with your tongue, my dear Watson, but certainly with your eyebrows. So when I saw you throw down your paper and enter upon a train of thought, I was very happy to have the opportunity of reading it off, and eventually of breaking into it, as a proof that I had been in rapport with you."

But I was still far from satisfied. "In the example which you read to me," said I, "the reasoner drew his conclusions from the actions of the man whom he observed. If I remember right, he stumbled over a heap of stones, looked up at the stars, and so on. But I have been seated quietly in my chair, and what clues can I have given you?"

"You do yourself an injustice. The features are given to man as the means by which he shall express his emotions, and yours are faithful servants."

"Do you mean to say that you read my train of thoughts from my features?"

"Your features and especially your eyes....