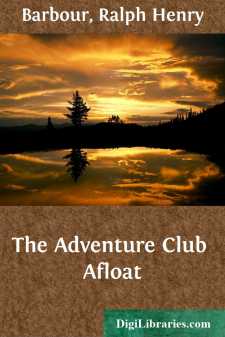 The Adventure Club had its inception, one evening toward the last of June, in Number 17 Sumner Hall, which is the oldest, most vine-hidden and most hallowed of the seven dormitories of Dexter Academy. It was a particularly warm evening, the two windows were wide open and the green-shaded light on the study table in the centre of the room had been turned low—Sumner prided itself on being conservative to the extent of gas instead of electricity and tin bathtubs instead of porcelain—and in the dim radiance the three occupants of the room were scarcely more than darker blurs.

Since final examinations had ended that afternoon and Graduation Day was only some twenty-eight hours away, none of the three was doing anything more onerous than yawning, and the yawn which came from Perry Bush, didn't sound as though it cost much of an effort. It was, rather, a comfortable, sleepy yawn, one that expressed contentment and relief, a sort of "Glad-that's-over-and-I'm-still-alive" yawn.

There was a window-seat under each casement in Number 17, and each was occupied by a recumbent figure. Perry was on the right-hand seat, his hands under his head and one foot sprawled on the floor, and Joe Ingersoll was in the other, his slim, white-trousered legs jack-knifed against the darker square of the open window. Near Joe, his feet tucked sociably against Joe's ribs, Steve Chapman, the third of the trio, reclined in a Morris chair. I use the word reclined advisedly, for Steve had lowered the back of the chair to its last notch, and to say that he was sitting would require a stretch of the imagination almost as long as Steve himself! Through the windows Steve could see the dark masses of the campus elms, an occasional star between the branches, and, by raising his head the fraction of an inch, the lights in the upper story of Hawthorne, across the yard. Somewhere under the trees outside a group of fellows were singing to the accompaniment of a wailing ukelele. They sang softly, so that the words floated gently up to the open casements just distinguishable:

"Aw, shut up!" muttered Perry, breaking the silence that had held them for several minutes. Joe Ingersoll laughed softly.

"You don't seem to like the efforts of the—um—sweet-voiced choristers," he said in his slow way.

"I don't like the sob-stuff," replied Perry resentfully. "What's the use of rubbing it in? Why not let a fellow be cheerful after he has got through by the skin of his teeth and kicked his books under the bed? Gosh, some folks never want anyone to be happy!" He raised himself by painful effort and peered out and down into the gloom. "Sophs, I'll bet," he murmured, falling back again on the cushions....