The Adductor Muscles of the Jaw In Some Primitive Reptiles 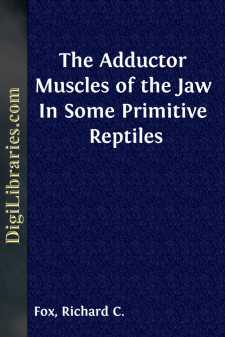 Information about osteological changes in the groups of reptiles that gave rise to mammals is preserved in the fossil record, but the musculature of these reptiles has been lost forever. Nevertheless, a reasonably accurate picture of the morphology and the spatial relationships of the muscles of many of these extinct vertebrates can be inferred by studying the scars or other marks delimiting the origins and insertions of muscles on the skeletons of the fossils and by studying the anatomy of Recent genera. A reconstruction built by these methods is largely speculative, especially when the fossil groups are far removed in time, kinship and morphology from Recent kinds, and when distortion, crushing, fragmentation and overzealous preparation have damaged the surfaces associated with the attachment of muscles. The frequent inadequacy of such direct evidence can be partially offset by considering the mechanical demands that groups of muscles must meet to perform a particular movement of a skeletal member.

Both direct anatomical evidence and inferred functional relations were used to satisfy the purposes of the study here reported on. The following account reports the results of my efforts to: 1, reconstruct the adductor muscles of the mandible in Captorhinus and Dimetrodon; 2, reconstruct the external adductors of the mandible in the cynodont Thrinaxodon; and 3, learn the causes of the appearance and continued expansion of the temporal fenestrae among the reptilian ancestors of mammals.

The osteology of these three genera is comparatively well-known. Although each of the genera is somewhat specialized, none seems to have departed radically from its relatives that comprised the line leading to mammals.

I thank Prof. Theodore H. Eaton, Jr., for suggesting the study here reported on, for his perceptive criticisms regarding it, and for his continued patience throughout my investigation. Financial assistance was furnished by his National Science Foundation Grant (NSF-G8624) for which I am also appreciative. I thank Dr. Rainer Zangerl, Chief Curator of Geology, Chicago Museum of Natural History, for permission to examine the specimens of Captorhinus and Dimetrodon in that institution. I am grateful to Mr. Robert F. Clarke, Assistant Professor of Biology, The Kansas State Teachers College, Emporia, Kansas, for the opportunity to study his specimens of Captorhinus from Richard's Spur, Oklahoma. Special acknowledgment is due Mr. Merton C. Bowman for his able preparation of the illustrations.

In contrast with these dimensional changes there has been little shift in the pattern of the dermal bones that roof the adductor chambers. The most conspicuous modification in Captorhinus is the absence of the tabular. This element in Protorothyris was limited to the occiput and rested without sutural attachment upon the squamosal (Watson, 1954:338); later loss of the tabular could have had no effect upon the origins of muscles from inside the skull roof. Changes in pattern that may have modified the origin of the adductors in Captorhinus were correlated with the increase in length of the parietals and the reduction of the supratemporals. Other changes that were related to the departure from the primitive romeriid condition of the adductors included the development of a coronoid process, the flattening of the quadrate-articular joint, and the development of the peculiar dentition of Captorhinus....