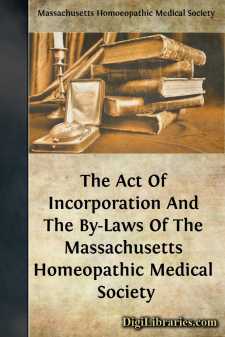 AN ACT TO INCORPORATE THE MASSACHUSETTS HOMOEOPATHIC MEDICAL SOCIETY.

Be it enacted by the Senate and House of Representatives in GeneralCourt assembled, and by the authority of the same, as follows:—

SECT. 1.—Samuel Gregg, William Wesselhoeft, Luther Clark, George Russell, Milton Fuller, John A. Tarbell, David Thayer, their associates and successors, physicians, be, and they hereby are, made a Corporation, by the name of the MASSACHUSETTS HOMOEOPATHIC MEDICAL SOCIETY, with all the powers and privileges, and subject to all the duties, liabilities, and restrictions, set forth in the forty-fourth chapter of the Revised Statues.

SECT. 2.—Said Corporation may hold real and personal estate to the amount of fifty thousand dollars.

SECT. 3.—The members of said Society shall not be liable to be mustered or enrolled in the militia of this Commonwealth.

SECT. 4.—The members of said Society, or such of their officers or members as they shall appoint, shall have full power and authority to examine all candidates for membership, concerning the practice of specific medicine and surgery, provided said candidates shall sustain a good moral character, and shall present letters testimonial of their qualifications from some legally authorized medical institution; and if, upon such examination, the said candidates shall be found qualified for membership, they shall receive the approbation of the Society.

SECT. 5.—This act shall take effect from and after its passage.

House of Representatives, May 30, 1856.Passed to be enacted, CHARLES A. PHELPS, Speaker.

I. This Society shall consist of the persons named in the Act of Incorporation, and such other persons as may have been elected members in accordance with its By-laws.

OFFICERS OF THE SOCIETY.

II. The Society, at its Annual Meeting, shall elect, by ballot, a President, two Vice-Presidents, Corresponding Secretary, Recording Secretary, Treasurer, Librarian, and five Censors, who shall together constitute an Executive Committee, to whom shall be intrusted the general business of the Society when it is not in session; the appointment of all standing committees, and such other committees as they may deem expedient; and the selection of some suitable person to deliver an address, at the annual meeting of the Society, on some subject connected with medical science. At every annual meeting, they shall present a report of their proceedings during the past year; and shall also furnish a list of two candidates for each office of the Society for the ensuing year....