The Abominations of Modern Society 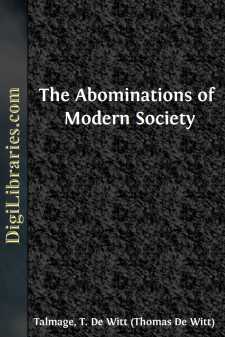 Pride of city is natural to men, in all times, if they live or have lived in a metropolis noted for dignity or prowess. Cæsar boasted of his native Rome; Lycurgus of Sparta; Virgil of Andes; Demosthenes of Athens; Archimedes of Syracuse; and Paul of Tarsus. I should suspect a man of base-heartedness who carried about with him no feeling of complacency in regard to the place of his residence; who gloried not in its arts, or arms, or behavior; who looked with no exultation upon its evidences of prosperity, its artistic embellishments, and its scientific attainments.

I have noticed that men never like a place where they have not behaved well. Swarthout did not like New York; nor Dr. Webster, Boston. Men who have free rides in prison-vans never like the city that furnishes the vehicle.

When I see in history Argos, Rhodes, Smyrna, Chios, Colophon, and several other cities claiming Homer, I conclude that Homer behaved well.

Let us not war against this pride of city, nor expect to build up ourselves by pulling others down. Let Boston have its Common, its Faneuil Hall, its Coliseum, and its Atlantic Monthly. Let Philadelphia talk about its Mint, and Independence Hall, and Girard College. When I find a man living in either of those places, who has nothing to say in favor of them, I feel like asking him, "What mean thing did you do, that you do not like your native city?"

New York is a goodly city. It is one city on both sides of the river. The East River is only the main artery of its great throbbing life. After a while four or five bridges will span the water, and we shall be still more emphatically one than now. When, therefore, I say "New York city," I mean more than a million of people, including everything between Spuyten Duyvil Creek and Gowanus. That which tends to elevate a part, elevates all. That which blasts part, blasts all. Sin is a giant; and he comes to the Hudson or Connecticut River, and passes it, as easily as we step across a figure in the carpet. The blessing of God is an angel; and when it stretches out its two wings, one of them hovers over that, and the other over this.

In infancy, the great metropolis was laid down by the banks of the Hudson. Its infancy was as feeble as that of Moses, sleeping in the bulrushes by the Nile; and like Miriam, there our fathers stood and watched it. The royal spirit of American commerce came down to the water to bathe; and there she found it. She took it in her arms, and the child grew and waxed strong; and the ships of foreign lands brought gold and spices to its feet; and, stretching itself up into the proportions of a metropolis, it has looked up to the mountains, and off upon the sea,—one of the mightiest of the energies of American civilization.

The character of the founder of a city will be seen for many years in its inhabitants. Romulus impressed his life upon Rome. The Pilgrims relax not their hold upon the cities of New England. William Penn has left Philadelphia an inheritance of integrity and fair dealing; and on any day in that city you may see in the manners, customs, and principles of its people, his tastes, his coat, his hat, his wife's bonnet, and his plain meeting-house....