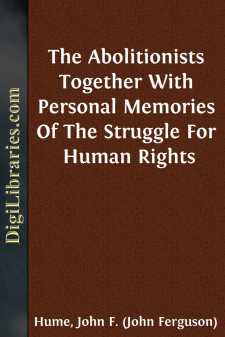 CHAPTER I THEODORE ROOSEVELT AND THE ABOLITIONISTS

The following is an extract from Theodore Roosevelt's biography of Thomas H. Benton in Houghton, Mifflin, & Co.'s American Statesmen Series, published in 1887:

"Owing to a variety of causes, the Abolitionists have received an immense amount of hysterical praise which they do not deserve, and have been credited with deeds done by other men whom, in reality, they hampered and opposed rather than aided. After 1840, the professed Abolitionists formed a small and comparatively unimportant portion of the forces that were working towards the restriction and ultimate destruction of slavery; and much of what they did was positively harmful to the cause for which they were fighting. Those of their number who considered the Constitution as a league with death and hell, and who, therefore, advocated a dissolution of the Union, acted as rationally as would anti-polygamists nowadays if, to show their disapproval of Mormonism, they should advocate that Utah should be allowed to form a separate nation. The only hope of ultimately suppressing slavery lay in the preservation of the Union, and every Abolitionist who argued or signed a petition for the dissolution was doing as much to perpetuate the evil he complained of, as if he had been a slaveholder. The Liberty party, in running Birney, simply committed a political crime, evil in almost all its consequences. They in no sense paved the way for the Republican party, or helped forward the Anti-Slavery cause, or hurt the existing organizations. Their effect on the Democracy was nil; and all they were able to accomplish with the Whigs was to make them put forward for the ensuing election a slaveholder from Louisiana, with whom they were successful. Such were the remote results of their conduct; the immediate evils they produced have already been alluded to. They bore considerable resemblance—except that after all they really did have a principle to contend for—to the political Prohibitionists of the present day, who go into the third party organization, and are, not even excepting the saloon-keepers themselves, the most efficient allies on whom intemperance and the liquor traffic can count.

"Anti-Slavery men like Giddings, who supported Clay, were doing a thousandfold more effective work for the cause they had at heart than all the voters who supported Birney; or, to speak more accurately, they were doing all they could to advance the cause, while the others were doing all they could to hold it back. Lincoln in 1860 occupied more nearly the ground held by Clay than that held by Birney; and the men who supported the latter in 1844 were the prototypes of those who worked to oppose Lincoln in 1860, and only worked less hard because they had less chance. The ultra Abolitionists discarded expediency, and claimed to act for abstract right on principle, no matter what the results might be; in consequence they accomplished very little, and that as much for harm as for good, until they ate their words, and went counter to their previous course, thereby acknowledging it to be bad, and supported in the Republican party the men and principles they had so fiercely condemned....