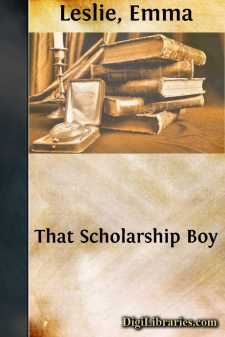 CHAPTER I. Brother and Sister.

'I say, we've got a new boy at Torrington's. Haven't had one for ages and ages, so it's made quite a stir among us.'

'You can make stir enough when you are coming out of school,' said his sister, lifting her eyes from her lessons and looking across the table.

'Nobody knows—that's the fun,' said Leonard, with a short whistle.

'Don't you even know his name?'

'That's just like a girl, Duffy; you're worse than usual,' said her brother, setting his elbows on the table, and nibbling the end of the pen-holder in a meditative fashion. 'Of course he was properly introduced to the class as Mr. Horace Howard.'

'Howard is a nice name,' commented Duffy, whose real name was Florence. 'It was Aunt Lucy's name before she was married, you know.'

No, I don't know. I may have heard it, but the name's nothing. I don't suppose his father was hanged!' said her brother.

'Perhaps he is some distant relative of the Duke of Norfolk? though auntie says she has nothing to do with those Howards.'

A mocking laugh greeted this suggestion. 'Go on, Duffy, let us have some more of your wisdom.'

'I don't see what there is to laugh at, Len, and I am sure I don't want to hear about the new boy,' said his sister indignantly, and she turned to her lessons once more.

This brought a fusillade of paper pellets from the student sitting opposite. She bore it patiently for a minute or two, and then angrily demanded why he did not get on with his lessons and let her do the same, and threatened to ring the bell.

'Don't be a bigger duffer than you are, Flo. You can't help being a girl, I know; but I'm willing to help you all I can out of a girl's foolishness. Only a girl would talk of ringing the bell, and making a row, because she can't have all her own way. Come now, I want to talk to you about the new boy, and we can finish the lesson afterwards.'

'But you say you don't know anything about him, and so there's nothing to talk about,' said his sister.

'Yes, that's just it. Why shouldn't the fellow tell us who his people are, where he comes from, and what he's going to do with himself by-and-by?'

It was his sister's turn to laugh now. 'What queer notions boys have!' she exclaimed. 'I suppose you expect a new scholar to come and say, "My father is a doctor, or a lawyer, and we have three servants at our house," as soon as the master has introduced him to the class.'

A ball of paper was levelled at Duffy's head for this remark. 'Who said he was to do it the first day or the second day? But when a fellow has been there nearly a fortnight you expect to hear something about who he is.'

'But suppose he don't choose to tell you, what then?'

'Yes, that's it. How are we going to make him? What would you do, Duffy? That's what I want to know.'

'Oh, I'm only a girl,' said Duffy with a laugh. 'I can't be expected to understand boys' affairs like that.'

'Yes, you do—that's just what girls do understand. We can't have a good stand up fight, which is the way we generally settle things.'

Leonard heaved a sigh of despair. 'There never was anything half so stupid as a girl!' he exclaimed. 'Do you think if it was anything we could settle off-hand like that I should ask you about it?'

'Oh, like most other fellows, I suppose, or at least he was the first day, I know, for I took particular notice as he came into the class; but the last day or two he has come in a jacket that ought to have gone to the rag-bag three months ago, and——'

'But his jacket can't hurt you,' interrupted his sister, 'you don't have to wear it.'

'You stupid duffer! don't he go to Torrington's, I tell you, and haven't we got to stand up for the honour of the school?'