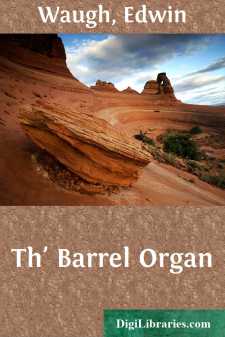 I came out at Haslingden town-end with my old acquaintance, "Rondle o'th Nab," better known by the name of "Sceawter," a moor-end farmer and cattle dealer. He was telling me a story about a cat that squinted, and grew very fat because—to use his own words—it "catched two mice at one go." When he had finished the tale, he stopped suddenly in the middle of the road, and looking round at the hills, he said, "Nea then. I'se be like to lev yo here. I mun turn off to 'Dick o' Rough-cap's' up Musbury Road. I want to bargain about yon heifer. He's a very fair chap, is Dick,—for a cow-jobber. But yo met as weel go up wi' me, an' then go forrud to our house. We'n some singers comin' to neet."

"Well, then," replied he, "yo mun strike off at th' lift hond, about a mile fur on; an' then up th' hill side, an' through th' delph. Fro theer yo mun get upo' th' owd road as weel as yo con; an' when yo'n getten it, keep it. So good day, an' tak care o' yorsel'. Barfoot folk should never walk upo' prickles." He then turned, and walked off. Before he had gone twenty yards he shouted back, "Hey! I say! Dunnot forget th' cat."

It was a fine autumn day; clear and cool. Dead leaves were whirling about the road-side. I toiled slowly up the hill, to the famous Horncliffe Quarries, where the sounds of picks, chisels, and gavelocks, used by the workmen, rose strangely clear amidst the surrounding stillness. From the quarries I got up by an old pack horse road, to a commanding elevation at the top of the moors. Here I sat down on a rude block of mossy stone, upon a bleak point of the hills, overlooking one of the most picturesque parts of the Irwell valley. The country around me was part of the wild tract still known by its ancient name of the Forest of Rossendale. Lodges of water and beautiful reaches of the winding river gleamed in the evening sun, among green holms and patches of woodland, far down the vale; and mills, mansions, farmsteads, churches, and busy hamlets succeeded each other as far as the eye could see. The moorland tops and slopes were all purpled with fading heather, save here and there where a well-defined tract of green showed that cultivation had worked up a little plot of the wilderness into pasture land. About eight miles south, a gray cloud hung over the town of Bury, and nearer, a flying trail of white steam marked the rush of a railway train along the valley. From a lofty perch of the hills, on the north-west, the sounds of Haslingden church bells came sweetly upon the ear, swayed to and fro by the unsettled wind, now soft and low, borne away by the breeze, now full and clear, sweeping by me in a great gush of melody, and dying out upon the moorland wilds behind. Up from the valley came drowsy sounds that tell the wane of day, and please the ear of evening as she draws her curtains over the world. A woman's voice floated up from the pastures of an old farm-house, below where I sat, calling the cattle home. The barking of dogs sounded clear in different parts of the vale, and about scattered hamlets, on the hill sides. I could hear the far-off prattle of a company of girls, mingled with the lazy joltings of a cart, the occasional crack of a whip, and the surly call of a driver to his horses, upon the high road, half a mile below me. From a wooded slope, on the opposite side of the valley, the crack of a gun came, waking the echoes for a minute; and then all seemed to sink into a deeper stillness than before, and the dreamy surge of sound broke softer and softer upon the shores of evening, as daylight sobered down. High above the green valley, on both sides, the moorlands stretched away in billowy wildernesses—dark, bleak, and almost soundless, save where the wind harped his wild anthem upon the heathery waste, and where roaring streams filled the lonely cloughs with drowsy uproar....