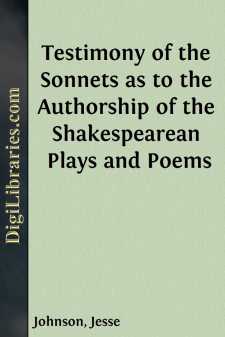 The Shakespearean Sonnets are not a single or connected work like an ordinary play or poem. Their composition apparently extended over a considerable time, which may be fairly estimated as not less than four years. Read literally they seem to portray thoughts, modes or experiences fairly assignable to such a period. Though variable and sometimes light and airy in their movement, the greater portion appear to reveal deep and intense emotion, the welling and tumultous floods of the inner life of their great author. And their difficulty or mystery is, that they indicate circumstances, surroundings, experiences and regrets that we almost instinctively apprehend could not have been those of William Shakespeare at the time they were written, when he must have been in the strength of early manhood, in the warmth and glow of recent and extraordinary advancement and success.

It is this difficulty that apparently has caused many to believe that their literal meaning cannot be accepted, and that we must give to them, or to many of them, a secondary meaning, founded on affectations or conceits relating to different topics or persons, or that at least we should not allow that in them the poet is speaking of himself. Others, like Grant White, simply allow and state the difficulty and leave it without any suggestion of solution.

Before conceding, however, that the splendid poetry contained in the Sonnets must be sundered or broken, or the apparent reality of its message doubted or denied, or that its message is mysterious or inexplicable—we should carefully inquire whether there is not some view or theory which will avoid the difficulties which have so baffled inquiry.

I believe that there is such a view or theory, and that view is—that the Sonnets were not written by Shakespeare, but were written to him as the patron or friend of the poet; that while Shakespeare may have been the author of some plays produced in his name at the theatre where he acted, or while he may have had a part in conceiving or framing the greater plays so produced, there was another, a great poet, whose dreamy and transforming genius wrought in and for them that which is imperishable, and so wrought although he was to have no part in their fame and perhaps but a small financial recompense; and that it is the loves, griefs, fears, forebodings and sorrows of the student and recluse, thus circumstanced and confined, that the Sonnets portray.

Considering that the Sonnets were so written, there is no need of any other than a literal and natural reading or interpretation. Commencing in expressions of gratulation and implied flattery, as they proceed, they appear to have been written as the incidents, fears and griefs which they indicate from time to time came; and it may well be that they were written not for publication, but as vents or expressions of a surcharged heart. With such a view of the situation of the poet and of his patron, we may not only understand much that otherwise is inexplicable, but we may understand why so much and such resplendent poetry is lavished on incidents so bare, meagre, and commonplace, and why they present both poet and patron with frailties and faults naked and repellant; and we can the better palliate and forgive the weakness and subjection which the Sonnets indicate on the part of their author. With such a reading the Sonnets become a chronicle of the modes and feelings of their author, resembling in this respect the In Memoriam of Tennyson; and their poetry becomes deeper and better, often equalling, if not surpassing in pathos and intensity anything in the greater Shakespearean plays.

Such is the result or conclusion to which the discussion which follows is intended to lead. I shall not, however, ask the reader to accept any such conclusion or result merely because it removes difficulties or because it makes or rather leaves the poetry better; but I shall present—that the Sonnets contain direct testimony, testimony not leading to surmise or conjecture, but testimony which would authorize a judgment in a court of law, that the Sonnets were not written by Shakespeare, and that they very strongly indicate that Shakespeare was the friend or patron to whom so many of them are addressed....