!Tention A Story of Boy-Life during the Peninsular War 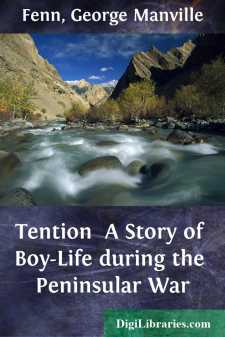 To save a Comrade.

A sharp volley, which ran echoing along the ravine, then another, just as the faint bluish smoke from some hundred or two muskets floated up into the bright sunshine from amidst the scattered chestnuts and cork-trees that filled the lower part of the beautiful gorge, where, now hidden, now flashing out and scattering the rays of the sun, a torrent roared and foamed along its rocky course onward towards its junction with the great Spanish river whose destination was the sea.

Again another ragged volley; and this was followed by a few dull, heavy-sounding single shots, which came evidently from a skirmishing party which was working its way along the steep slope across the river.

There was no responsive platoon reply to the volley, but the skirmishing shots were answered directly by crack! crack! crack! the reports that sounded strangely different to those heavy, dull musket-shots which came from near at hand, and hardly needed glimpses of dark-green uniforms that dotted the hither slope of the mountain-side to proclaim that they were delivered by riflemen who a few minutes before were, almost in single line, making their way along a rugged mountain-path.

A second glance showed that they formed the rear-guard of a body of sharpshooters, beyond whom in the distance could be made out now and then glints of bright scarlet, which at times looked almost orange in the brilliant sunshine—orange flashed with silver, as the sun played upon musket-barrel and fixed bayonet more than shoulder-high.

The country Spain, amidst the towering Pyrenees; the scarlet that of a British column making its way along a rugged mule-path, from which those that traversed it looked down upon a scene of earthly beauty, and upwards at the celestial blue, beyond which towered the rugged peaks where here and there patches of the past winter’s snow gleamed and sparkled in the sun.

Strategy had indicated retreat; and the black-green, tipped at collar and cuff with scarlet, of England’s rifle-regiment was covering the retiring line, when the blue-coated columns of the French General’s division had pressed on and delivered the wild volleys and scattered shots of the skirmishers which drew forth the sharp, vicious, snapping reply of the retreating rear-guard.

“At last!” said one of the riflemen, rising from where he had knelt on one knee to take cover behind a bush, and there stand driving down a cartridge with a peculiarly sharp, ringing sound of iron against iron, before finishing off with a few heavy thuds, returning the bright rod to its loops, and raising the pan of the lock to see that it was well primed with the coarse powder of the day.

“Yes—at last!” said his nearest comrade, who with a few more had halted at a subaltern’s command to wait in cover for a shot or two at their pursuing foe. “Are we going to hold this place?”

“No,” said the young officer. “Hear that, my man?” For a note or two of a bugle rang out sweet and clear in the beautiful valley, suggesting to one of the men a similar scene in an English dell; but he sighed to himself as it struck him that this was a different hunt, and that they, the men of the —th, the one rifle-regiment of the British Army, were the hunted, and that those who followed were the French....