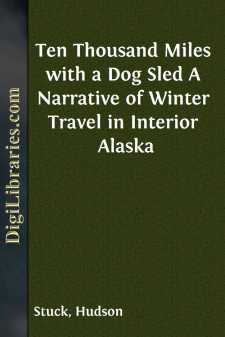 This volume deals with a series of journeys taken with a dog team over the winter trails in the interior of Alaska. The title might have claimed fourteen or fifteen thousand miles instead of ten, for the book was projected and the title adopted some years ago, and the journeys have continued. But ten thousand is a good round titular number, and is none the worse for being well within the mark.

So far as mere distance is concerned, anyway, there is nothing noteworthy in this record. There are many men in Alaska who have done much more. A mail-carrier on one of the longer dog routes will cover four thousand miles in a winter, while the writer's average is less than two thousand. But his sled has gone far off the beaten track, across the arctic wilderness, into many remote corners; wherever, indeed, white men or natives were to be found in all the great interior.

These journeys were connected primarily with the administration of the extensive work of the Episcopal Church in the interior of Alaska, under the bishop of the diocese; but that feature of them has been fully set forth from time to time in the church publications, and finds only incidental reference here.

It is a great, wild country, little known save along accustomed routes of travel; a country with a beauty and a fascination all its own; mere arctic wilderness, indeed, and nine tenths of it probably destined always to remain such, yet full of interest and charm.

Common opinion "outside" about Alaska seems to be veering from the view that it is a land of perpetual snow and ice to the other extreme of holding it to be a "world's treasure-house" of mineral wealth and agricultural possibility. The world's treasure is deposited in many houses, and Alaska has its share; its mineral wealth is very great, and "hidden doors of opulence" may open at any time, but its agricultural possibilities, in the ordinary sense in which the phrase is used, are confined to very small areas in proportion to the enormous whole, and in very limited degree.

It is no new thing for those who would build railways to write in high-flown style about the regions they would penetrate, and, indeed, to speak of "millions of acres waiting for the plough" is not necessarily a misrepresentation; they are waiting. Nor is it altogether unnatural that professional agricultural experimenters at the stations established by the government should make the most of their experiments. When Dean Stanley spoke disdainfully of dogma, Lord Beaconsfield replied; "Ah! but you must always remember, no dogmas, no deans."

Besides the physical attractions of this country, it has a gentle aboriginal population that arouses in many ways the respect and the sympathy of all kindly people; and it has some of the hardiest and most adventurous white men in the world. The reader will come into contact with both in these pages.