Ten Nights in a Bar Room 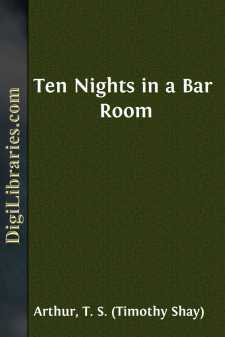 THE "SICKLE AND SHEAF."

Ten years ago, business required me to pass a day in Cedarville. It was late in the afternoon when the stage set me down at the "Sickle and Sheaf," a new tavern, just opened by a new landlord, in a new house, built with the special end of providing "accommodations for man and beast." As I stepped from the dusty old vehicle in which I had been jolted along a rough road for some thirty miles, feeling tired and hungry, the good-natured face of Simon Slade, the landlord, beaming as it did with a hearty welcome, was really a pleasant sight to see, and the grasp of his hand was like that of a true friend.

I felt as I entered the new and neatly furnished sitting-room adjoining the bar, that I had indeed found a comfortable resting-place after my wearisome journey.

"All as nice as a new pin," said I, approvingly, as I glanced around the room, up to the ceiling—white as the driven snow—and over the handsomely carpeted floor. "Haven't seen anything so inviting as this. How long have you been open?"

"Only a few months," answered the gratified landlord. "But we are not yet in good going order. It takes time, you know, to bring everything into the right shape. Have you dined yet?"

"No. Everything looked so dirty at the stage-house, where we stopped to get dinner, that I couldn't venture upon the experiment of eating. How long before your supper will be ready?"

"In an hour," replied the landlord.

"That will do. Let me have a nice piece of tender steak, and the loss of dinner will soon be forgotten."

"You shall have that, cooked fit for an alderman," said the landlord. "I call my wife the best cook in Cedarville."

As he spoke, a neatly dressed girl, about sixteen years of age, with rather an attractive countenance, passed through the room.

"My daughter," said the landlord, as she vanished through the door. There was a sparkle of pride in the father's eyes, and a certain tenderness in the tones of his voice, as he said "My daughter" that told me she was very dear to him.

"You are a happy man to have so fair a child," said I, speaking more in compliment than with a careful choice of words.

"I am a happy man," was the landlord's smiling answer; his fair, round face, unwrinkled by a line of care or trouble, beaming with self-satisfaction. "I have always been a happy man, and always expect to be. Simon Slade takes the world as it comes, and takes it easy. My son, sir," he added, as a boy, in his twelfth year, came in. "Speak to the gentleman."

The boy lifted to mine a pair of deep blue eyes, from which innocence beamed, as he offered me his hand, and said, respectfully—"How do you do, sir?" I could not but remark the girl-like beauty of his face, in which the hardier firmness of the boy's character was already visible.

"Frank is his name," said the landlord—"we called him after his uncle. Frank and Flora—the names sound pleasant to the ears. But you know parents are apt to be a little partial and over fond."

"Better that extreme than its opposite," I remarked....