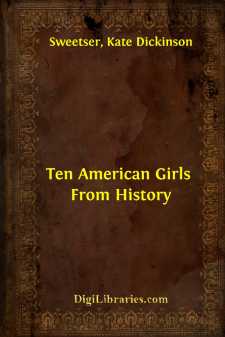 POCAHONTAS: THE INDIAN GIRL OF THE VIRGINIA FOREST

Sunlight glinting between huge forest trees, and blue skies over-arching the Indian village of Werewocomoco on the York River in Virginia, where Powhatan, the mighty "Werowance," or ruler over thirty tribes, was living.

Through Orapakes and Pamunkey and other forest settlements a long line of fierce warriors were marching Indian file, on their way to Werewocomoco, leading a captive white man to Powhatan for inspection and for sentence. As the warriors passed into the Indian village, they encountered crowds of dusky braves and tattooed squaws hurrying along the wood trails, and when they halted at the central clearing of the village, the crowd closed in around them to get a better view of the captive. At the same time there rose a wild clamor from the rear of the throng as a merry group of shrieking, shouting girls and boys darted forward, jostling their way through the crowd.

Their leader was a slender, straight young girl with laughing eyes such as are seldom seen among Indians, and hair as black as a crow's wing blown about her cheeks in wild disorder, while her manner was that of a happy hearty forest maiden. This was Matoaka, daughter of the Werowance Powhatan, and although he had many subjects as well as twenty sons and eleven daughters, not one was ruled so despotically as was he himself, by this slender girl with laughing eyes, for whom his pet name was Pocahontas, or in free translation, "little romp."

Having established themselves in the front row of the crowd the girls and boys stood eagerly staring at the prisoner, for many of them had never seen a white man before, and as Pocahontas watched, she looked like a forest flower in her robe of soft deer-skin, with beaded moccasins on her shapely feet, coral bracelets and anklets vying with the color in her dark cheeks, while a white plume drooping over her disordered hair proclaimed her to be the daughter of a great chief. In her health and happiness she radiated a charm which made her easily the ruling spirit among her mates, and compelled the gaze of the captive, whose eyes, looking about for some friendly face among the savage throng, fastened on the eager little maiden with a feeling of relief, for her bright glance showed such interest in the prisoner and such sympathy with him as was to endear her to his race in later years.

The long line of braves with their heads and shoulders gaily painted had wound their slow way through forest, field, and meadow to bring into the presence of the great "Werowance" a no less important captive than Captain John Smith, leader in the English Colony at Jamestown by reason of his quick wit and stout heart. The settlers having been threatened with a famine, the brave Captain had volunteered to go on an expedition among neighboring Indian villages in search of a supply of corn. The trip had been full of thrilling adventures for him, and had ended disastrously in his being taken prisoner by Opechancanough, the brother of Powhatan. The news of Smith's capture having been carried to the great Werowance, he commanded that the pale-faced Caucarouse, or Captain, be brought to him for sentence....