Teddy The Story of a Little Pickle 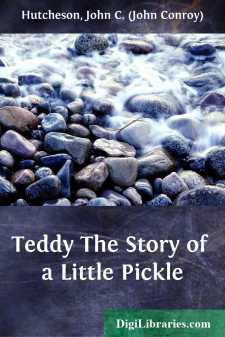 This sudden and unexpected exclamation, uttered as it was in a shrill little voice like that of a piping bullfinch, and coming from nowhere in particular, as far as he could make out, for he had fancied himself all alone on the platform, made the tall railway porter almost jump out of his skin, as he expressed it, startling him out of his seven senses.

He was a stalwart, good-natured, black-bearded giant of a man, clad in a suit of dunduckety-mud-coloured velveteens, rather the worse for wear, and smeary with oil and engine-grease, which gave them a sort of highly-burnished appearance resembling that of a newly-polished black-leaded stove.

Doing nothing, and thinking of nothing specially, for the three-forty up-train had gone through the station, and it was a good hour yet before the five-ten down express was due, he had been lazily leaning in a half-dreamy and almost dozing state against the side of the booking-office.

From this coign of vantage, he was, as well as his blinking eyes would allow, gazing out over the rails at the fast-falling flakes of feathery snow that were quickly covering up the metals and permanent way with a mantle of white; when, all at once, without a “by your leave,” or seeing or hearing anyone approach, his attention was summarily brought back to the present by the strange announcement of the shrill little voice, while, at the same time, he felt the clutch of tiny fingers twitching at one of the legs of his shiny velveteen trousers, evidently as a further means of attracting his notice.

The touch made the porter look downwards, when, perceiving that his unknown interlocutor was a small mite barely reaching up to his knees, he became more reassured; and, bending his big body so as to bring his face somewhat on a level with the young person, he proceeded to interrogate him in familiar fashion.

“Well, my little man,” he said, desiring to learn how he might be of service, for he was a genial willing fellow, and always anxious to oblige people when he knew how—“what’s the matter?”

“I want do d’an’ma!” repeated the small mite in the same piping tones as before, speaking with the utmost assurance and in the most matter-of-fact way.

It seemed as if, having now explicitly notified his wants and wishes, he confidently looked forward, in all the innocent trust of childhood, to their being instantly acted upon and carried out without any demur or hesitation.

Jupp, the porter, was quite flabbergasted by the little chap’s sang-froid; so, in order the better to collect his ideas and enable him to judge what was best to be done under the circumstances, he took off his flat-peaked uniform cap with one hand and scratched his head reflectively with the fingers of the other, as is frequently the wont of those possessed of thick skulls and wits that are apt to go wool-gathering.

The operation appeared to have the effect desired; for, after indulging in this species of mental and physical cogitation for a moment or two, Jupp ventured upon asking the mite another question which had brilliantly suggested itself to him as opportune....