Tales of the Caravan, Inn, and Palace 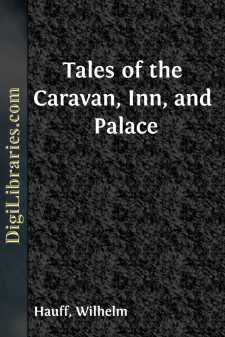 Once upon a time, a large caravan moved slowly over the desert. On the vast plain, where nothing was to be seen but sand and sky, might have been heard in the far distance the tinkling bells of the camels and the ringing hoof beats of horses. A thick cloud of dust that moved before it indicated the approach of the caravan; and when a breeze parted this cloud, gleaming weapons and brilliantly colored garments dazzled the eye.

Thus was the caravan revealed to a man who galloped towards it from one side. He rode a fine Arabian horse, covered with a tiger skin; from the deep-red trappings depended little silver bells, while on the horse's head waved a plume of heron feathers. The horseman was of stately bearing, and his attire corresponded in richness with that of his horse. A white turban, richly embroidered with gold, covered his head; his coat and Turkish trousers were of scarlet; while a curved sword, with a rich hilt, hung at his side. He had pulled the turban down well over his face; and this, with the black eyes that flashed from beneath the bushy brows, together with the long beard that hung straight down from his Roman nose, gave him a fierce and uncouth appearance.

When the rider had approached to within about fifty paces of the vanguard of the caravan, he spurred his horse forward, and in a few moments reached the head of the procession. It was such an unusual occurrence to see a single horseman riding over the desert that the escort of the train, fearing an attack, thrust out their spears.

"What do you mean?" cried the horseman, as he saw this warlike reception. "Do you, then, believe a single man would attack your caravan?"

Ashamed of their momentary alarm, the escort dropped their lances; while their leader rode up to the stranger and asked what he wanted.

"Who is the master of this caravan?" inquired the horseman.

"It does not belong to one man," replied the guide; "but to several merchants who are returning from Mecca to their homes, and whom we escort across the desert, as it often happens that travelers are annoyed by robbers."

"Then lead me to these merchants," requested the stranger.

"That may not be done now," replied the guide, "as we must proceed farther on before coming to a halt, and the merchants are at least a quarter of an hour behind us; but if you will ride on with me until we encamp for our mid-day rest, I will then comply with your wish."

The stranger made no reply, but produced a pipe that was fastened to his saddle-bow, and began to smoke, meanwhile riding near the leader of the vanguard. The guide knew not what to make of the stranger; he hardly dared to question him directly as to his name, and no matter how skillfully he sought to draw him into conversation, the stranger would only reply to such attempts as: "You smoke a fine quality of tobacco," or, "Your horse has a splendid pace," with a short "Yes, certainly."

Finally they reached the spot where they were to camp for the noon. The guide posted the guards, but remained himself with the stranger until the caravan should come up. Thirty camels, heavily laden, and attended by armed guards, passed by. After these came the four merchants to whom the caravan belonged, mounted on fine horses. They were mostly men of advanced age, of sober and staid appearance. Only one seemed much younger than the others, and of more cheerful countenance and vivacious spirits. A large number of camels and pack-horses completed the caravan....