Tales of Space and Time 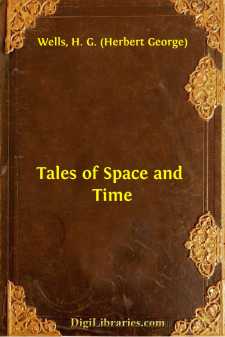 There was, until a year ago, a little and very grimy-looking shop near Seven Dials, over which, in weather-worn yellow lettering, the name of "C. Cave, Naturalist and Dealer in Antiquities," was inscribed. The contents of its window were curiously variegated. They comprised some elephant tusks and an imperfect set of chessmen, beads and weapons, a box of eyes, two skulls of tigers and one human, several moth-eaten stuffed monkeys (one holding a lamp), an old-fashioned cabinet, a flyblown ostrich egg or so, some fishing-tackle, and an extraordinarily dirty, empty glass fish-tank. There was also, at the moment the story begins, a mass of crystal, worked into the shape of an egg and brilliantly polished. And at that two people, who stood outside the window, were looking, one of them a tall, thin clergyman, the other a black-bearded young man of dusky complexion and unobtrusive costume. The dusky young man spoke with eager gesticulation, and seemed anxious for his companion to purchase the article.

While they were there, Mr. Cave came into his shop, his beard still wagging with the bread and butter of his tea. When he saw these men and the object of their regard, his countenance fell. He glanced guiltily over his shoulder, and softly shut the door. He was a little old man, with pale face and peculiar watery blue eyes; his hair was a dirty grey, and he wore a shabby blue frock coat, an ancient silk hat, and carpet slippers very much down at heel. He remained watching the two men as they talked. The clergyman went deep into his trouser pocket, examined a handful of money, and showed his teeth in an agreeable smile. Mr. Cave seemed still more depressed when they came into the shop.

The clergyman, without any ceremony, asked the price of the crystal egg. Mr. Cave glanced nervously towards the door leading into the parlour, and said five pounds. The clergyman protested that the price was high, to his companion as well as to Mr. Cave—it was, indeed, very much more than Mr. Cave had intended to ask, when he had stocked the article—and an attempt at bargaining ensued. Mr. Cave stepped to the shop-door, and held it open. "Five pounds is my price," he said, as though he wished to save himself the trouble of unprofitable discussion. As he did so, the upper portion of a woman's face appeared above the blind in the glass upper panel of the door leading into the parlour, and stared curiously at the two customers. "Five pounds is my price," said Mr. Cave, with a quiver in his voice.

The swarthy young man had so far remained a spectator, watching Cave keenly. Now he spoke. "Give him five pounds," he said. The clergyman glanced at him to see if he were in earnest, and, when he looked at Mr. Cave again, he saw that the latter's face was white. "It's a lot of money," said the clergyman, and, diving into his pocket, began counting his resources. He had little more than thirty shillings, and he appealed to his companion, with whom he seemed to be on terms of considerable intimacy....