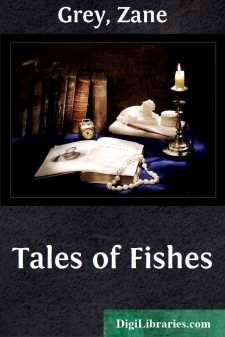 Been to Avalon with Grey ... been most everywhere;Chummed with him and fished with him in every Sportsman’slair.Helped him with the white Sea-bass and Barracuda haul,Shared the Tuna’s sprayful sport and heard his Hunter-call,Me an’ Grey are fishin’ friends.... Pals of rod and reel,Whether it’s the sort that fights ... or th’ humble eel,On and on, through Wonderland ... winds a-blowin’ free,Catching all th’ fins that grow ... Sportsman Grey an’ Me.Been to Florida with Zane ... scouting down th’ coast;Whipped the deep for Tarpon, too, that natives love th’ most.Seen the smiling, Tropic isles that pass, in green review,Gathered cocoanut and moss where Southern skies were blue.Seen him laugh that boyish laugh, when things were goin’right;Helped him beach our little boat and kindle fires at night.Comrades of the Open Way, the Treasure-Trove of Sea,Port Ahoy and who cares where, with Mister Grey an’ Me!Been to Western lands with Grey ... hunted fox and deer.Seen the Grizzly’s ugly face with danger lurkin’ near.Slept on needles, near th’ sky, and marked th’ round moonriseOver purpling peaks of snow that hurt a fellow’s eyes.Gone, like Indians, under brush and to some mystic place—Home of red men, long since gone, to join their dying race.Yes ... we’ve chummed it, onward—outward ... mountain,wood, and Key,At the quiet readin’-table ... Sportsman Grey an’ Me.

TALES OF FISHES I BYME-BY-TARPON

To capture the fish is not all of the fishing. Yet there are circumstances which make this philosophy hard to accept. I have in mind an incident of angling tribulation which rivals the most poignant instant of my boyhood, when a great trout flopped for one sharp moment on a mossy stone and then was gone like a golden flash into the depths of the pool.

Some years ago I followed Attalano, my guide, down the narrow Mexican street of Tampico to the bank of the broad Panuco. Under the rosy dawn the river quivered like a restless opal. The air, sweet with the song of blackbird and meadowlark, was full of cheer; the rising sun shone in splendor on the water and the long line of graceful palms lining the opposite bank, and the tropical forest beyond, with its luxuriant foliage festooned by gray moss. Here was a day to warm the heart of any fisherman; here was the beautiful river, celebrated in many a story; here was the famous guide, skilled with oar and gaff, rich in experience. What sport I would have; what treasure of keen sensation would I store; what flavor of life would I taste this day! Hope burns always in the heart of a fisherman.

Attalano was in harmony with the day and the scene. He had a cheering figure, lithe and erect, with a springy stride, bespeaking the Montezuma blood said to flow in his Indian veins. Clad in a colored cotton shirt, blue jeans, and Spanish girdle, and treading the path with brown feet never deformed by shoes, he would have stopped an artist....