Tales from the Hindu Dramatists 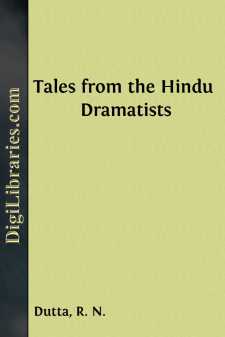 SAKUNTALA or THE LOST RING.

In ancient days, there was a mighty king of the Lunar dynasty by name Dushyanta. He was the king of Hastinapur. He once goes out a-hunting and in the pursuit of a deer comes near the hermitage of the sage Kanwa, the chief of the hermits, where some anchorites request him not to kill the deer. The king feels thirsty and was seeking water when he saw certain maidens of the hermits watering the favourite plants. One of them, an exquisitely beautiful and bashful maiden, named Sakuntala, received him. She was the daughter of the celestial nymph Menaka by the celebrated sage Viswamitra and foster-child of the hermit Kanwa. She is smitten with love at the first sight of the king, standing confused at the change of her own feeling. The love at first sight which the king conceives for her is of too deep a nature to be momentary. Struck by her beauty he exclaims:—

"Her lip is ruddy as an opening bud; her graceful arms resemble tender shoots; attractive as the bloom upon the tree, the glow of youth is spread on all her limbs."

Seizing an opportunity of addressing her, he soon feels that it is impossible for him to return to his capital. His limbs move forward, while his heart flies back, like a silken standard borne against the breeze. He seeks for opportunities for seeing her. With the thought about her haunting him by day and night, he finds no rest, and no pleasure even in his favourite recreation—sporting. Mathavya, the jester, friend and companion of the king, however, breaks the dull monotony of his anxious time. The opportunity which the king seeks offers itself. The hermits send an embassy to the king asking him to come over to the hermitage to guard their sacrifices. As he was making preparations for departure to the hermitage, Karavaka, a messenger from the queen-mother, arrives asking his presence at the city of Hastinapur.

He is at first at a loss to extricate himself from this difficulty but a thought strikes him and he acts upon it. He sends the jester as his substitute to the city. He is now at leisure to seek out the love-sick Sakuntala who is drooping on account of her love for the king and is discovered lying on a bed of flowers in an arbour. He comes to the hermitage, overhears her conversation with her two friends, shows himself and offers to wed her. For a second time, the lovers thus meet. He enquires of her parentage to see if there is any obstacle to their being united in marriage; whereupon Sakuntala asks her companion Priyambada to satisfy the king with an account of her birth. The king hearing the story of her birth asks the companion to get the consent of Sakuntala to be married to him according to the form known as gandharva.

Sakuntala requests the king to wait till her foster-father Kanwa, who had gone out on a pilgrimage, would come back and give his consent. But the king, becoming importunate, she at last gives her consent. They are married according to the gandharva form, on the condition that the issue of the marriage should occupy the throne of Hastinapur. She accepts from her lord a marriage-ring as the token of recognition.

The king then goes away, after having promised to shortly send his ministers and army to escort her to his Capital. When Kanwa returns to the hermitage, he becomes aware of what has transpired during his absence by his spiritual powers, and congratulates Sakuntala on having chosen a husband worthy of her in every respect. Next day, when Sakuntala is deeply absorbed in thoughts about her absent lord, the celebrated choleric sage Durvasa comes and demands the rights of hospitality. But he is not greeted with due courtesy by Sakuntala owing to her pre-occupied state. Upon this, the ascetic pronounces a curse that he whose thought has led her to forget her duties towards guests, would disown her.

Sakuntala does not hear it, but Priyambada hears it and by entreaties appeases the wrath of the sage, who being conciliated ordains that the curse would cease at the sight of some ornament of recognition.

Sakuntala becomes quick with child and in the seventh month of her pregnancy is sent by her foster-father to Hastinapur, in the company of her sister Gautami, and his two disciples Sarngarva and Saradwata....