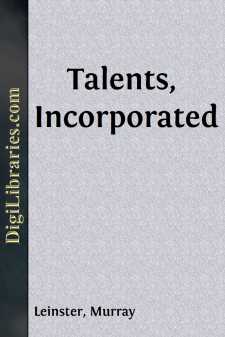 Young Captain Bors—who impatiently refused to be called anything else—was strangely occupied when the communicator buzzed. He'd ripped away the cord about a thick parcel of documents and heaved them into the fireplace of the office of the Minister for Diplomatic Affairs. A fire burned there, and already there were many ashes. The carpet and the chairs of the cabinet officer's sanctum were coated with fine white dust. As the communicator buzzed again, Captain Bors took a fireplace tool and stirred the close-packed papers to looseness. They caught and burned instead of only smouldering.

The communicator buzzed yet again. He brushed off his hands and pressed the answer-stud.

The communicator relayed a voice from somewhere else with an astonishing fidelity of tone.

"Spaceport, sir. A ship just broke out of overdrive. We don't identify its type. One ship only, sir."

"You'd recognize a liner. If it's a ship from the Mekinese fleet and stays alone, it could be coming to receive our surrender. In that case play for time and notify me."

There was a clicking, and then there came a voice which had the curious quality of a loudspeaker sound picked up and relayed through another loudspeaker.

A pause. The voice from the spaceport:

Captain Bors said impatiently, "Oh, let him down and see if he knows anything about the Mekinese. Then advise him to go away at once. Tell him why."

A click. Young Captain Bors returned to his task of burning papers. These were the confidential records of the Ministry for Diplomatic Affairs. Captain Bors wore the full-dress uniform of the space navy of the planet Kandar. It was still neatly pressed but was now smudged with soot and smeared with ashes. He had burned a great many papers today. Elsewhere in the Ministry other men were burning other documents. The other papers were important enough; they were confidential reports from volunteer- and paid-agents on twenty planets. In the hands of ill-disposed persons, they could bring about disaster and confusion and interplanetary tension. But the ones Captain Bors made sure of were deadly.

He burned papers telling of conditions on Mekin itself. The authors of such memoranda would be savagely punished if they were found out. Then there were papers telling of events on Tralee. If it could be said that he were more painstakingly destructive than average about anything, Captain Bors was about them. He saw to it that they burned to ashes. He crushed the ashes. He stirred them. It would be unthinkable that such morsels could ever be pieced together and their contents even guessed at.

He went on with the work. His jaunty uniform became more smeared and smudged....