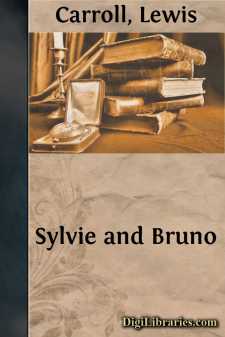 "What's your name, little one?" I began, in as soft a voice as I could manage. And, by the way, why is it we always begin by asking little children their names? Is it because we fancy a name will help to make them a little bigger? You never thought of as king a real large man his name, now, did you? But, however that may be, I felt it quite necessary to know his name; so, as he didn't answer my question, I asked it again a little louder. "What's your name, my little man?"

"What's oors?" he said, without looking up.

I told him my name quite gently, for he was much too small to be angry with.

"Duke of Anything?" he asked, just looking at me for a moment, and then going on with his work.

"Not Duke at all," I said, a little ashamed of having to confess it.

"Oo're big enough to be two Dukes," said the little creature."I suppose oo're Sir Something, then?"

"No," I said, feeling more and more ashamed. "I haven't got any title."

The Fairy seemed to think that in that case I really wasn't worth the trouble of talking to, for he quietly went on digging, and tearing the flowers to pieces.

After a few minutes I tried again. "Please tell me what your name is."

"That's something like what we used to be taught in the nursery," I thought to myself, looking back through the long years (about a hundred of them, since you ask the question), to the time when I was a little child. And here an idea came into my head, and I asked him "Aren't you one of the Fairies that teach children to be good?"

"Well, we have to do that sometimes," said Bruno, "and a dreadful bother it is." As he said this, he savagely tore a heartsease in two, and trampled on the pieces.

"What are you doing there, Bruno?" I said.

"Spoiling Sylvie's garden," was all the answer Bruno would give at first. But, as he went on tearing up the flowers, he muttered to himself "The nasty cross thing wouldn't let me go and play this morning,—said I must finish my lessons first—lessons, indeed! I'll vex her finely, though!"

"Don't you know that's revenge? And revenge is a wicked, cruel, dangerous thing!"

"River-edge?" said Bruno. "What a funny word! I suppose oo call it cruel and dangerous 'cause, if oo wented too far and tumbleded in, oo'd get drownded."

"No, not river-edge," I explained: "revenge" (saying the word very slowly). But I couldn't help thinking that Bruno's explanation did very well for either word.

"Oh!" said Bruno, opening his eyes very wide, but without trying to repeat the word.

But Bruno only tossed his little head, and said he couldn't; that his mouth wasn't the right shape for words of that kind. And the more I laughed, the more sulky the little fellow got about it.

"Shall I help you with that job?"

"Only I wiss I could think of somefin to vex her more than this.Oo don't know how hard it is to make her angry!"

"Now listen to me, Bruno, and I'll teach you quite a splendid kind of revenge!"

"Somefin that'll vex her finely?" he asked with gleaming eyes.

"Something that will vex her finely. First, we'll get up all the weeds in her garden. See, there are a good many at this end quite hiding the flowers."

"But that won't vex her!" said Bruno.

"After that," I said, without noticing the remark, "we'll water this highest bed—up here....