Syd Belton The Boy who would not go to Sea 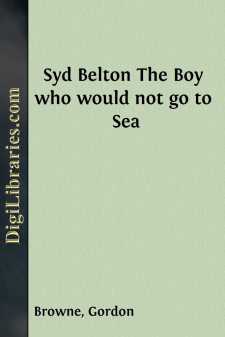 The boy who would not go to sea.

Sydney Belton took hold of the silver decanter-stand and slid it carefully along the polished mahogany table towards where Admiral Belton sat back in his chair.

The ruddy-faced old gentleman roared out that adjuration in so thunderous a way that the good-looking boy who was passing the decanter started and nearly turned it over.

“What’s the matter, Tom?” came from the other end of the table, where Captain Belton, a sturdy-looking, grey-haired gentleman nearly as ruddy as his brother, was the admiral’s vis-à-vis.

“He’s passing the decanter without filling his own glass!” cried the admiral. “Fill up, you young dog, and drink the King’s health.”

“Well, sir, so have I. Don’t I tell you I’m going to propose the King’s health?”

“What, sir? Drink the health of his most gracious Majesty in raw water! Not if I know it.”

“No, you wouldn’t, uncle,” said the boy, cracking a walnut, and glancing at his father, who was watching him furtively.

“I don’t know about corrupting, Tom,” said the captain, smiling, “but he certainly does seem to be putting some queer things into his head.”

“So it seems. Teaches him to drink the King’s health in water.”

“No, he didn’t, uncle,” said the boy, cracking another walnut.

“Yes, he did, sir. How dare you contradict me! Confound you, sir, if I had you aboard ship I’d mast-head you.”

“No, you wouldn’t, uncle,” said the boy, dipping a piece of freshly-peeled walnut in the salt and crunching it between his teeth.

“I say you would not,” replied the boy.

“And pray why, you young dog?”

Captain Belton laughed and sipped his port, and the admiral blew out his cheeks.

“Look here, brother Harry,” he cried; “is this my nephew Sydney, or some confounded young son of a sea-lawyer?”

“Then he’s grown into an insolent, pragmatical young cock-a-hoop upstart; and hang it, I should like to spread-eagle him till he came to his senses.”

The boy, who was peeling a scrap of walnut, gave his uncle a sidelong look and laughed.

“Ah, I would, sir, and no mistake,” cried the admiral, fiercely. “Harry, you don’t half preserve discipline in the ship. Here, Syd, it’s time you were off to sea.”

The boy took another walnut and crushed it, conscious of the fact that his father was watching him intently.

“I don’t want to go to sea, uncle,” said the boy at last, as he picked off the scraps of broken shell from his walnut....