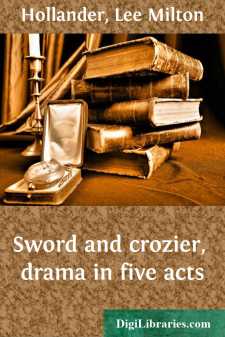 (So-called 'Little Hall' in BRAND'S manor-house at Reynistad. Enter the DEACON SIGURD, THOROLF BJARNASON, ALF OF GROF, and EINAR THE RICH, of Vik.)

Thorolf.—Where is Brand Kolbeinsson? I bear a message for him from my Lord Kolbein the Young.

Sigurd.—Why comes he not himself?

Alf.—Kolbein is nigh unto d——

Sigurd.—He lies sick with his wound, I ween.

Einar the Rich (aside).—That news I ought to bring secretly to Thord Kakali.

Thorolf.—Why will Lady Jorun not speak to her guests?

Sigurd.—She bade me say that she had seen you last, Thorolf Bjarnason, at such business that she cares not to see you any more.

Thorolf (laughs).—Last I saw her at the slaying of Kalf Guttormsson, her father, and of Guttorm, her brother.

Sigurd.—Much good reason has my lady if she cares to see you no more.

Einar.—You are the man who most egged on to the deed, that father and son should be slain.

Thorolf.—No, Urækja it was, the son of Snorri Sturlason. A most useful deed it was. Ever since Kolbein's men have obeyed his commands without gainsaying.

Einar.—More useful still, I suppose you think that you snatched from out of Kalf's hands the crucifix he held when kneeling to receive the mortal stroke.

Thorolf.—His blood would have spurted on the cross, had it been held so near. (Wrathfully.) And likewise would I do to you, Einar the Rich, if Kolbein struck off your head. Your wife is a kinswoman of Thord Kakali, and dreamt have I that you will find an earlier grave than will I.

Einar.—An evil business it is to threaten me with death. No one knows who will be buried first. A faithful follower of Kolbein I have been.

Sigurd.—Wicked speech this is and witless.

Thorolf.—Ay, sir; and with a message for you, for Broddi, and for other chieftains, from Kolbein the Young.

Brand.—Is it that Thord Kakali is expected from the West with war?

Thorolf.—Not to my knowledge. He is still busy drinking the arvel after Tumi his brother, whom we put to death this last week!

Alf.—Yes, and he and his men are now drinking the ale by the bowlful, they say.

Brand.—What of it, if Thord does give his men in plenty?

Thorolf.—And why should we not speak of it, we who know what folly it is for men to drink heavily before going to war?

Einar.—A generous chieftain is Thord Kakali, and likely to accomplish great deeds. No chieftain in this land has ever lost so many men as has he. It is not seeming to make sport of his sorrow.

Thorolf.—None have I ever seen flee so fast as these men of Thord's, they urge each other on to flight.

Brand.—Idle speech is this, Thorolf!

Thorolf.—I say what I will, and care not whether others like it or no....