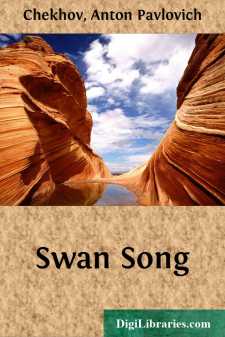 THE last years of the nineteenth century were for Russia tinged with doubt and gloom. The high-tide of vitality that had risen during the Turkish war ebbed in the early eighties, leaving behind it a dead level of apathy which lasted until life was again quickened by the high interests of the Revolution. During these grey years the lonely country and stagnant provincial towns of Russia buried a peasantry which was enslaved by want and toil, and an educated upper class which was enslaved by idleness and tedium. Most of the "Intellectuals," with no outlet for their energies, were content to forget their ennui in vodka and card-playing; only the more idealistic gasped for air in the stifling atmosphere, crying out in despair against life as they saw it, and looking forward with a pathetic hope to happiness for humanity in "two or three hundred years." It is the inevitable tragedy of their existence, and the pitiful humour of their surroundings, that are portrayed with such insight and sympathy by Anton Tchekoff who is, perhaps, of modern writers, the dearest to the Russian people.

Anton Tchekoff was born in the old Black Sea port of Taganrog on January 17, 1860. His grandfather had been a serf; his father married a merchant's daughter and settled in Taganrog, where, during Anton's boyhood, he carried on a small and unsuccessful trade in provisions. The young Tchekoff was soon impressed into the services of the large, poverty-stricken family, and he spoke regretfully in after years of his hard-worked childhood. But he was obedient and good-natured, and worked cheerfully in his father's shop, closely observing the idlers that assembled there, and gathering the drollest stories, which he would afterward whisper in class to his laughing schoolfellows. Many were the punishments which he incurred by this habit, which was incorrigible.

His grandfather had now become manager of an estate near Taganrog, in the wild steppe country of the Don Cossacks, and here the boy spent his summers, fishing in the river, and roving about the countryside as brown as a gipsy, sowing the seeds of that love for nature which he retained all his life. His evenings he liked best to spend in the kitchen of the master's house among the work people and peasants who gathered there, taking part in their games, and setting them all laughing by his witty and telling observations.

When Tchekoff was about fourteen, his father moved the family to Moscow, leaving Anton in Taganrog, and now, relieved of work in the shop, his progress at school became remarkable. At seventeen he wrote a long tragedy, which was afterward destroyed, and he already showed flashes of the wit that was soon to blaze into genius.

He graduated from the high school at Taganrog with every honour, entered the University of Moscow as a student of medicine, and threw himself headlong into a double life of student and author, in the attempt to help his struggling family.

His first story appeared in a Moscow paper in 1880, and after some difficulty he secured a position connected with several of the smaller periodicals, for which, during his student years, he poured forth a succession of short stories and sketches of Russian life with incredible rapidity....