Susy, a story of the Plains 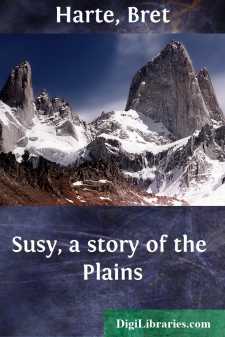 Where the San Leandro turnpike stretches its dusty, hot, and interminable length along the valley, at a point where the heat and dust have become intolerable, the monotonous expanse of wild oats on either side illimitable, and the distant horizon apparently remoter than ever, it suddenly slips between a stunted thicket or hedge of "scrub oaks," which until that moment had been undistinguishable above the long, misty, quivering level of the grain. The thicket rising gradually in height, but with a regular slope whose gradient had been determined by centuries of western trade winds, presently becomes a fair wood of live-oak, and a few hundred yards further at last assumes the aspect of a primeval forest. A delicious coolness fills the air; the long, shadowy aisles greet the aching eye with a soothing twilight; the murmur of unseen brooks is heard, and, by a strange irony, the enormous, widely-spaced stacks of wild oats are replaced by a carpet of tiny-leaved mosses and chickweed at the roots of trees, and the minutest clover in more open spaces. The baked and cracked adobe soil of the now vanished plains is exchanged for a heavy red mineral dust and gravel, rocks and boulders make their appearance, and at times the road is crossed by the white veins of quartz. It is still the San Leandro turnpike,—a few miles later to rise from this canada into the upper plains again,—but it is also the actual gateway and avenue to the Robles Rancho. When the departing visitors of Judge Peyton, now owner of the rancho, reach the outer plains again, after twenty minutes' drive from the house, the canada, rancho, and avenue have as completely disappeared from view as if they had been swallowed up in the plain.

A cross road from the turnpike is the usual approach to the casa or mansion,—a long, low quadrangle of brown adobe wall in a bare but gently sloping eminence. And here a second surprise meets the stranger. He seems to have emerged from the forest upon another illimitable plain, but one utterly trackless, wild, and desolate. It is, however, only a lower terrace of the same valley, and, in fact, comprises the three square leagues of the Robles Rancho. Uncultivated and savage as it appears, given over to wild cattle and horses that sometimes sweep in frightened bands around the very casa itself, the long south wall of the corral embraces an orchard of gnarled pear-trees, an old vineyard, and a venerable garden of olives and oranges. A manor, formerly granted by Charles V. to Don Vincente Robles, of Andalusia, of pious and ascetic memory, it had commended itself to Judge Peyton, of Kentucky, a modern heretic pioneer of bookish tastes and secluded habits, who had bought it of Don Vincente's descendants. Here Judge Peyton seemed to have realized his idea of a perfect climate, and a retirement, half-studious, half-active, with something of the seignioralty of the old slaveholder that he had been. Here, too, he had seen the hope of restoring his wife's health—for which he had undertaken the overland emigration—more than fulfilled in Mrs....