Susan A Story for Children 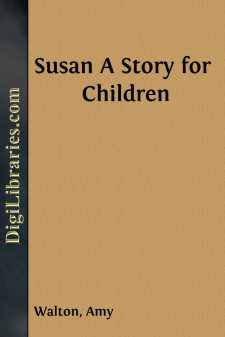 “No, indeed! My mistress will have enough on her hands as it is, what with the journey, and poor Master Freddie such a care an’ all, an’ so helpless. I don’t deny I’ve a sinkin’ myself when I think of it; but if it’s to do the poor child good, I’m not the one to stand in his way.”

“Where’s she to stay, then, while you’re all away?”

“With an aunt of Missis’ at Ramsgate. An old lady by what I hear.”

Susan heard all this; for, though she was snugly curled up in her little bed at the other end of the room, she was not asleep. Now and then she opened her eyes drowsily and peeped from the bed-clothes, which nearly covered her round face, at Nurse and Maria bending over their work by the fire. There was only one candle on the table, and they poked their heads so near the flame as they talked that she wondered the caps did not catch light, particularly Maria’s, which was very high and fussy in front. Susan began to count the narrow escapes she had, but before she had got far she became so interested in the conversation that she gave it up.

Not that they said anything at all new to her, for it had been settled long ago, and her mother often talked about it. Susan knew it all as well as possible. How the doctor had said that Freddie, her elder brother, who was always ill and weakly, must now be taken out of England to a warm climate for the winter months. She had heard her mother say what a long journey it would be, how much it would cost, how difficult it was to leave London; and yet it was the only chance for Freddie, and so it must be done. She knew that very soon they were to start, and Nurse was to go too; but she herself was to be left behind, with an old lady she had never seen, all the time they were gone.

But, although she knew all this she had not felt that it was a thing to dread, or that she was much to be pitied; she had even looked forward to it with a sort of pleased wonder about all the new things she should see and do, for this old lady lived by the sea-side, and Susan had never been there. She had seen it in pictures and read of it in story-books, and her mother had told her of many pleasures she would find which were not to be had anywhere else. When she thought of it, therefore, it was of some unknown but very agreeable place where she would dig in the sand and perhaps bathe in the sea, and pick up beautiful shells for Freddie and herself.

To-night, however, for the first time, as she listened to Nurse and Maria mumbling over their work in the half-light, she began to think of it differently, and even to be a little alarmed; so that when Maria said, “Por little thing!” with such a broad accent of pity, Susan felt sorry too. She was a poor little thing, no doubt, to be left behind; and then there was another matter she had not thought of much—the old lady. “My Aunt Enticknapp,” her mother always called her; a difficult and ugly name to begin with, and very hard to pronounce....