Sunshine Sketches of a Little Town 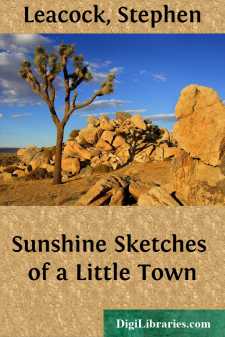 I know no way in which a writer may more fittingly introduce his work to the public than by giving a brief account of who and what he is. By this means some of the blame for what he has done is very properly shifted to the extenuating circumstances of his life.

I was born at Swanmoor, Hants, England, on December 30, 1869. I am not aware that there was any particular conjunction of the planets at the time, but should think it extremely likely. My parents migrated to Canada in 1876, and I decided to go with them. My father took up a farm near Lake Simcoe, in Ontario. This was during the hard times of Canadian farming, and my father was just able by great diligence to pay the hired men and, in years of plenty, to raise enough grain to have seed for the next year's crop without buying any. By this process my brothers and I were inevitably driven off the land, and have become professors, business men, and engineers, instead of being able to grow up as farm labourers. Yet I saw enough of farming to speak exuberantly in political addresses of the joy of early rising and the deep sleep, both of body and intellect, that is induced by honest manual toil.

I was educated at Upper Canada College, Toronto, of which I was head boy in 1887. From there I went to the University of Toronto, where I graduated in 1891. At the University I spent my entire time in the acquisition of languages, living, dead, and half-dead, and knew nothing of the outside world. In this diligent pursuit of words I spent about sixteen hours of each day. Very soon after graduation I had forgotten the languages, and found myself intellectually bankrupt. In other words I was what is called a distinguished graduate, and, as such, I took to school teaching as the only trade I could find that need neither experience nor intellect. I spent my time from 1891 to 1899 on the staff of Upper Canada College, an experience which has left me with a profound sympathy for the many gifted and brilliant men who are compelled to spend their lives in the most dreary, the most thankless, and the worst paid profession in the world. I have noted that of my pupils, those who seemed the laziest and the least enamoured of books are now rising to eminence at the bar, in business, and in public life; the really promising boys who took all the prizes are now able with difficulty to earn the wages of a clerk in a summer hotel or a deck hand on a canal boat.

In 1899 I gave up school teaching in disgust, borrowing enough money to live upon for a few months, and went to the University of Chicago to study economics and political science. I was soon appointed to a Fellowship in political economy, and by means of this and some temporary employment by McGill University, I survived until I took the degree of Doctor of Philosophy in 1903. The meaning of this degree is that the recipient of instruction is examined for the last time in his life, and is pronounced completely full. After this, no new ideas can be imparted to him.

From this time, and since my marriage, which had occurred at this period, I have belonged to the staff of McGill University, first as lecturer in Political Science, and later as head of the department of Economics and Political Science....