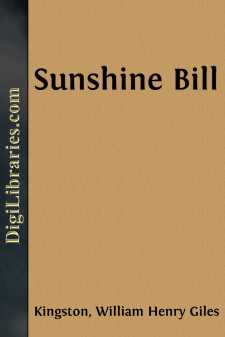 Sunshine Bill, according to the world’s notion, was not “born with a silver spoon in his mouth;” but he had, which was far better, kind, honest parents. His mother kept an apple-stall at Portsmouth, and his father was part owner of a wherry; but even by their united efforts, in fine weather, they found it hard work to feed and clothe their numerous offspring.

Sometimes Sunshine Bill’s father was laid up with illness, and sometimes his mother was so; and occasionally he and his brothers and sisters were sick also. Sometimes they had the measles, or small-pox, or a fever; and then there was the doctor to pay, and medicine to buy; consequently, at the end of these visitations, the family cash-box, consisting of an old stocking in a cracked basin, kept on the highest shelf of their sitting-room, was generally empty, and they considered themselves fortunate if they were not in debt besides. Still, no one ever heard them complain, or saw them quarrel, or beat their children, as some people do when things do not go straight with them; nor did their children ever fight among themselves. Even, indeed, in the worst of times, Sunshine Bill’s mother managed to find a crust of bread and a bit of cheese, to keep the family from starving. To be sure, she and her husband could not give their children much of an education, as far as school learning was concerned. They themselves, in spite of all trials, were never cast down; and they taught Bill, and his brothers and sisters, to follow their example. They said that God had always been kind to them, and that they were sure He would not change while they tried to do their duty and please Him.

The most contented, and merriest, and happiest of their children was Sunshine Bill. That was not his real name, though; indeed, he did not get it till long after the time I am speaking of.

He was properly called William Sunnyside, for, curiously enough, Sunnyside was his father’s name. His father was known as Merry Tom Sunnyside, and his mother as Pretty Molly Sunnyside—for pretty she had been when she was young, and good as she was pretty. It may seem surprising that they were not better off, but they began the world without anything, and children came fast upon them—a circumstance which keeps many people poor in worldly wealth.

Sunshine Bill, when still a very little fellow, found out how to keep the family pot boiling, even before some of his brothers had done so. No occupation came amiss to him. Sometimes he would go mud-larking, and seldom missed finding some treasure or other. The occupation was not a nice one, for the mud in Portsmouth Harbour is far from clean, or sweet to the nose; but Bill did not care for that, provided he was successful in his search. Sometimes, too, he would go fishing, and seldom came home without a pretty well-filled basket. Then he would look after seamen’s boats, and place stools for passengers to walk along when the water was low; and when the weather was bad, and few persons were going afloat, he would go on errands, or scamper alongside gentlemen’s horses, ready to hold them when they dismounted....