Suggestions to the Jews for improvement in reference to their charities, education, and general government 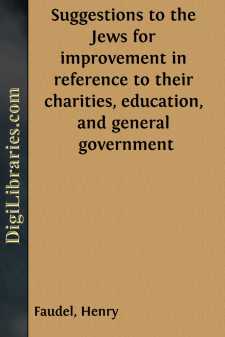 "As the twelve tribes had many interests in common, and, in some respects, formed but one political body, the magistrates of all the tribes met in general assemblies to consult for the good of the nation."

Jahn's History of the Hebrew Commonwealth.

Whoever regards the state of our community in this country, must come to the conclusion, that we have arrived at an important period, when we can no longer defer the consideration of matters of vital interest, if we would escape the well merited condemnation of the world at large, or the just reproaches of conscience in ourselves. We stand in a position where the past, the present, and the probable future are alike presented to our view; the first to instruct and warn us, and the two latter to furnish us with every motive to exertion which can be gathered from the impulses of hope and fear, from a perception of our own best interests and of those of our posterity. That the honour and reputation of the Jewish body are and have been at stake, must be granted by those who admit, as facts, the circumstances to which it is the aim of this Pamphlet to draw the public attention. The great majority of our poor are uneducated in the holy tenets of our creed—in their duties as citizens—in the proper arts of life; while poverty and distress abound in the dwellings of vast numbers of our brethren, partially mitigated, indeed, not permanently provided for, by the many excellent and worthy charitable societies which surround us. These are truths which painfully arrest the attention of individuals; and it becomes the duty of the whole, to seek the means of meeting the difficulties of the case. In the ensuing pages I venture to suggest some propositions for the purpose.

In all well constituted societies, it has been found necessary to have a head, from which all government, laws and regulations, have emanated. These governments have been formed either of one person or more, the object being, "a means to an end," or more fully speaking, "the production of the greatest possible amount of human happiness." This fact is so universally admitted, that associations for every object, whether religious or political, scientific or trading, have recourse to a governing body for carrying out their particular views; and, perhaps, I am not far wrong in stating, that the only exception in Great Britain of an extensive religious community being without a government is to be found amongst the Jews, not because the exigency is less, but because, from their first establishment in this kingdom, the want was never so much felt as at the present moment; their position has now become matter of inquiry to every enlightened mind, and many circumstances have recently shewn the disadvantages which a want of system has entailed upon those who profess the Jewish religion in this country—disadvantages which will be particularised as we proceed.

In the peculiar position of the Jewish people, I cannot find a term by which to distinguish them, and must therefore apologise for adopting those terms which are already in use. They are called a nation; and I avail myself of the word: but in what consists their nationality? They are termed a body: in what do they assimilate?...