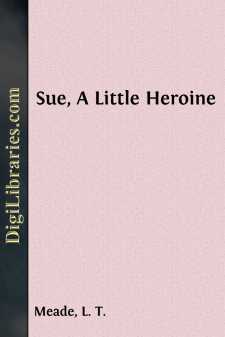 Sue made a great effort to push her way to the front of the crowd. The street preacher was talking, and she did not wish to lose a word. She was a small, badly made girl, with a freckled face and hair inclined to red, but her eyes were wonderfully blue and intelligent. She pushed and pressed forward into the thick of the crowd. She felt a hand on her shoulder, and looking up, saw a very rough man gazing at her.

"Be that you, Peter Harris?" said Sue. "An' why didn't yer bring Connie along?"

"Hush!" said some people in the crowd.

The preacher raised his voice a little higher:

"'Tell His disciples and Peter that He goeth before you into Galilee.'"

Peter Harris, the rough man, trembled slightly. Sue found herself leaning against him. She knew quite well that his breath was coming fast.

"His disciples and Peter," she said to herself.

The street preacher had a magnificent voice. It seemed to roll above the heads of the listening crowd, or to sink to a penetrating whisper which found its echo in their hearts. The deep, wonderful eyes of the man had a power of making people look at him. Sue gazed with all her might and main.

"Father John be a good un," she said to herself. "He be the best man in all the world."

After the discourse—which was very brief and full of stories, and just the sort which those rough people could not help listening to—a hymn was sung, and then the crowd dispersed.

Sue was amongst them. She was in a great hurry. She forgot all about John Atkins, the little street preacher to whom she had been listening. She soon found herself in a street which was gaily lighted; there was a gin-palace at one end, another in the middle, and another at the farther end. This was Saturday night: Father John was fond of holding vigorous discourses on Saturday nights. Sue stopped to make her purchases. She was well-known in the neighborhood, and as she stepped in and out of one shop and then of another, she was the subject of a rough jest or a pleasant laugh, just as the mood of the person she addressed prompted one or other. She spent a few pence out of her meager purse, her purchases were put into a little basket, and she found her way home. The season was winter. She turned into a street back of Westminster; it went by the name of Adam Street. It was very long and rambling, with broken pavements, uneven roadways, and very tall, narrow, and dirty houses.

In a certain room on the fourth floor of one of the poorest of these houses lay a boy of between ten and eleven years of age. He was quite alone in the room, but that fact did not at all insure his being quiet. All kinds of sounds came to him—sounds from the street, sounds from below stairs, sounds from overhead. There were shrieking voices and ugly laughter, and now and then there were shrill screams. The child was accustomed to these things, however, and it is doubtful whether he heard them.

He was a sad-looking little fellow, with that deadly white complexion which children who never go into the fresh air possess....