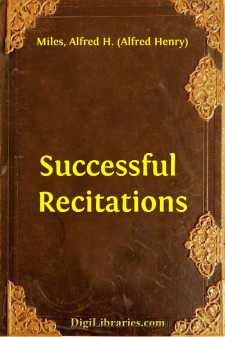 JOHN BULL AND HIS ISLAND. BY ALFRED H. MILES.

There's an open-hearted fellow in the Island,  Who loves the little Island to the full;Who cultivates the lowland and the highland  With a lover's loving care—John BullHis look is the welcome of a neighbour;  His hand is the offer of a friend;His word is the liberty of labour;  His blow the beginning of the end.Then here's to the Lord of the Island;  Highland and lowland and lea;And here's to the team—be it horse, be it steam—  He drives from the sea to the sea,Here's to his nod for the stranger;  Here's to his grip for a friend;And here's to the hand, on the sea, or the land,  Ever ready the right to defend.

There's a troop of trusty children from the Island  Who've planted Englands up and down the sea;Who cultivate the lowland and the highland  And fly the gallant colours of the free:Their hearts are as loyal as their mother's;  Their hands are as ready as their sire'sTheir bond is a union of brothers,—  Who fear not a holocaust of fires!Then here's to the Sons of the nation  Flying the flag of the free;Holding the farm and the station,  Keeping the Gates of the Sea;Handed and banded together,  In Arts, and in Arms, and in Song,Father and son, united as one,  Bearing her Banners along,Peacefully furled in the van of the world,  Or waving and braving the wrong!

THE RED ROSE OF WAR. BY F. HARALD WILLIAMS.

God hath gone forth in solemn might to shake  The peoples of the earth,Through the long shadow and the fires that make  New altar and new hearth!And with the besom of red war He sweeps  The sin and woe away,To purge with fountains from His ancient deeps  The dust of old decay.O not in anger but in Love He speaks  From tempest round Him drawn,Unveiling thus the fair white mountain peaks  Which tremble into dawn.

Not otherwise would Truth be all our own  Unless by flood and flame,When the last word of Destiny is known—  God's fresh revealed Name.For thence do windows burst in Heaven and light  Breaks on our darkened lands,And sovereign Mercy may fulfil through night  The Justice it demands.Ah, not in evil but for endless good  He bids the sluices runAnd death, to mould His blessed Brotherhood  Which had not else begun.

For if the great Arch-builder comes to frame  Yet broader empires, thenHe lays the stones in blood and splendid shame  With glorious lives of men....