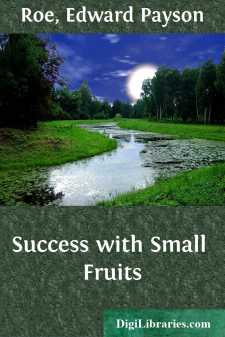 A book should be judged somewhat in view of what it attempts. One of the chief objects of this little volume is to lure men and women back to their original calling, that of gardening. I am decidedly under the impression that Eve helped Adam, especially as the sun declined. I am sure that they had small fruits for breakfast, dinner and supper, and would not be at all surprised if they ate some between meals. Even we poor mortals who have sinned more than once, and must give our minds to the effort not to appear unnatural in many hideous styles of dress, can fare as well. The Adams and Eves of every generation can have an Eden if they wish. Indeed, I know of many instances in which Eve creates a beautiful and fruitful garden without any help from Adam.

The theologians show that we have inherited much evil from our first parents, but, in the general disposition to have a garden, can we not recognize a redeeming ancestral trait? I would like to contribute my little share toward increasing this tendency, believing that as humanity goes back to its first occupation it may also acquire some of the primal gardener's characteristics before he listened to temptation and ceased to be even a gentleman. When he brutally blamed the woman, it was time he was turned out of Eden. All the best things of the garden suggest refinement and courtesy. Nature might have contented herself with producing seeds only, but she accompanies the prosaic action with fragrant flowers and delicious fruit. It would be well to remember this in the ordinary courtesies of life.

Moreover, since the fruit-garden and farm do not develop in a straightforward, matter-of-fact way, why should I write about them after the formal and terse fashion of a manual or scientific treatise? The most productive varieties of fruit blossom and have some foliage which may not be very beautiful, any more than the departures from practical prose in this book are interesting; but, as a leafless plant or bush, laden with fruit, would appear gaunt and naked, so, to the writer, a book about them without any attempt at foliage and flowers would seem unnatural. The modern chronicler has transformed history into a fascinating story. Even science is now taught through the charms of fiction. Shall this department of knowledge, so generally useful, be left only to technical prose? Why should we not have a class of books as practical as the gardens, fields, and crops, concerning which they are written, and at the same time having much of the light, shade, color, and life of the out-of-door world? I merely claim that I have made an attempt in the right direction, but, like an unskillful artist, may have so confused my lights, shades, and mixed my colors so badly, that my pictures resemble a strawberry-bed in which the weeds have the better of the fruit.

Liberal outlines of this work appeared in "Scribner's Magazine," but the larger scope afforded by the book has enabled me to treat many subjects for which there was no space in the magazine, and also to give my views more fully concerning topics only touched upon in the serial....