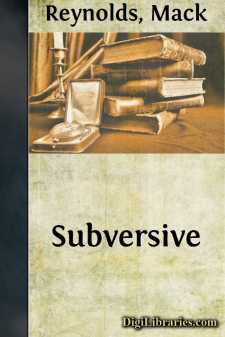 The young man with the brown paper bag said, "Is Mrs. Coty in?"

"I'm afraid she isn't. Is there anything I can do?"

"You're Mr. Coty? I came about the soap." He held up the paper bag.

"Soap?" Mr. Coty said blankly. He was the epitome of mid-aged husband complete to pipe, carpet slippers and office-slump posture.

"That's right. I'm sure she told you about it. My name's Dickens. Warren Dickens. I sold her—"

"Look here, you mean to tell me in this day and age you go around from door to door peddling soap? Great guns, boy, you'd do better on unemployment insurance. It's permanent now."

Warren Dickens registered distress. "Mr. Coty, could I come in and tell you about it? If I can make the first delivery to you instead of Mrs. Coty, shucks, it'll save me coming back."

Coty led him back into the living room, motioned him to a chair and settled into what was obviously his own favorite, handily placed before the telly. Coty said tolerantly, "Now then, what's this about selling soap? What kind of soap? What brand?"

The other looked at him.

"That's why we can sell it for three cents a cake, instead of twenty-five." Dickens opened the paper bag and fished out an ordinary enough looking cake of soap and handed it to the older man.

Mr. Coty took it, stared down at it, turned it over in his hands. He was still blank. "Well, what's different about it?"

"There's nothing different about it. It's the same as any other soap."

"I mean, how come you sell it for three cents a cake, and what's the fact it has no name got to do with it?"

Warren Dickens leaned forward and went into what was obviously a strictly routine pitch. "Mr. Coty, have you ever considered what you're buying when they nick you twenty-five cents on your credit card for a bar of soap in an ultra-market?"

There was an edge of impatience in the older man's voice. "I buy soap!"

"No, sir. That's your mistake. What you buy is a telly show, in fact several of them, with all their expensive comedians, singers, musicians, dancers, news commentators, network vice presidents, and all the rest. Then you buy fancy packaging. You'll note, by the way, that our product hasn't even a piece of tissue paper wrapped around it. Fancy packaging designed by some of the most competent commercial artists and motivational research men in the country. Then you buy distribution. From the factory all the way to the retail ultra-market where your wife shops. And every time that bar of soap goes from one wholesaler or distributor to another, the price roughly doubles. You also buy a brain trust whose full time project is to keep you using their soap and not letting their competitors talk you into switching brands. The brain trust, of course, also works on luring away the competitor's customers to their product. Shucks, Mr. Coty, practically none of that twenty-five cents you spend to buy a cake of soap goes for soap. So small a percentage that you might as well forget about it."

Mr. Coty was obviously taken aback. "Well, how do I know this nameless soap you're peddling is, well, any good?"

Warren Dickens sighed deeply, and in such wise that it was obvious that he had so sighed before....