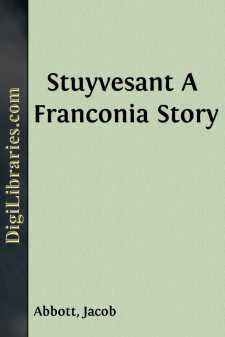 Chapter I. The Cavern.

One pleasant summer morning Alphonzo was amusing himself by swinging on a gate in front of his mother’s house. His cousin Malleville, who was then about eight years old, was sitting upon a stone outside of the gate, by the roadside, in a sort of corner that was formed between the wall and a great tree which was growing there. Malleville was employed in telling her kitten a story.

The kitten was sitting near Malleville, upon a higher stone. Malleville was leaning upon this stone, looking the kitten in the face. The kitten was looking down, but she seemed to be listening very attentively.

“Now, Kitty,” said Malleville, “if you will sit still and hark, I will tell you a story,—a story about a mouse. I read it in a book. Once there was a mouse, and he was white, and he lived in a cage. No I forgot,—there were three mice. I’ll begin again.

“Once there was a boy, and he had three white mice, and he kept them in a cage.”

Here Malleville’s story was interrupted by Phonny, who suddenly called out:

“I don’t care,” said Malleville, “I’m telling a story to Kitty, and you must not interrupt me.”

Here the kitten jumped down from the stone and ran away.

“Now Phonny!” said Malleville, “see what you have done;—you have made my Kitty go away.”

“I didn’t make her go away,” said Phonny.

“Yes you did,” said Malleville, “you interrupted my story, and that made her go away.”

Phonny laughed aloud at this assertion, though Malleville continued to look very serious. Phonny then repeated that he did not make the kitten go away, and besides, he said, he thought that it was very childish to pretend to tell a story to a kitten.

Malleville said that she did not think it was childish at all; for her kitten liked to hear stories. Phonny, at this, laughed again, and then Malleville, appearing to be still more displeased, said that she was not any more childish than Phonny himself was.

By this time Beechnut, as Phonny called him, had come up. He was driving a cart. The cart was loaded with wood. The wood consisted of small and dry sticks, which Beechnut had gathered together in the forest.

“Beechnut,” said Phonny, “are you going into the woods again for another load?”

“And may I go with you?” said Phonny.

Beechnut drove on into the yard, and at length stopped near a great woodpile. Beechnut began to throw off the wood. Phonny climbed up into the cart too, to help Beechnut unload. Malleville sat down upon a log lying near to see.

While they were at work thus, throwing off the wood, Phonny, instead of taking the smallest sticks that came in his way, tried always to get hold of the largest. He had three motives for doing this, all mingled together. The first was a pleasure in exercising his own strength; the second, a desire to show Malleville that he was no child; and the third, to make a display of his strength to Beechnut....