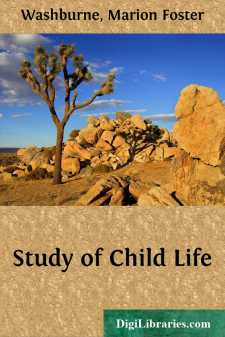 HOW THE CHILD DEVELOPS Condition at Birth

Let us see, then, exactly what his condition is. In the first place, he is, as Virchow, an authority on physiological subjects declares, merely a spinal animal. Some of the higher brain centers do not yet exist at all, while others are in too incomplete a state for service. The various sensations which the baby experiences—heat, light, contact, motion, etc.—are so many stimuli to the development of these centers. If the stimulus is too great, the development is sometimes unduly hastened, with serious results, which show themselves chiefly in later life. The child who is brought up a noisy room, is constantly talked to and fondled, is likely to develop prematurely, to talk and walk at an early age; also to fall into nervous decay at an early age. And even if by reason of an unusually good heredity he escapes these dangers, it is almost certain that his intellectual power is not so great in adult life as it would have been under more favorable conditions. A new baby, like a young plant, requires darkness and quiet for the most part. As he grows older, and shows a spontaneous interest in his surroundings, he may fittingly have more light, more companionship, and experience more sensations.

The average boy baby weighs about seven pounds at birth; the average girl, about six and a half pounds. The head is larger in proportion to the body than in after life; the nose is incomplete, the legs short and bowed, with a tendency to fall back upon the body with the knees flexed. This natural tendency should be allowed full play, for the flexed position is said to be favorable to the growth of the bones, permitting the cartilaginous ends of the bones to lie free from pressure at the joints.

The plates of the skull are not complete and do not fit together at the edges. Great care needs to be taken of the soft spot thus left exposed on the top of the head—the undeveloped place where the edges of these bones come together. Any injury here in early life is liable to affect the mind.

The bony enclosures of the middle ear are unfinished and the eyes also are unfinished. It is a question yet to be settled, whether a new-born baby is blind and deaf or not. At a rate, he soon acquires a sensitiveness to both light and sound, although it is three years or more before he has amassed sufficient experience to estimate with accuracy the distance of objects seen or herd. He can cry, suck, sneeze, cough, kick, and hold on to a finger. All of these acts, though they do not yet imply personality, or even mind, give evidence of a wonderful organism. They require the co-operation of many delicate nerves and muscles—a co-operation that has as yet baffled the power of scientists to explain.

Although the young baby is in almost constant motion while he is awake, he is altogether too weak to turn himself in bed or to escape from an uncomfortable position, and he remains so for many weeks. This constant motion is necessary to his muscular development, his control of his own muscles, his circulation, and, very probably, to the free transmission of nervous energy....