Studies in the Psychology of Sex, Volume 4 Sexual Selection In Man 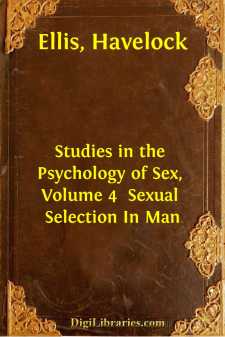 Add to My Favorites
Published: 9 years ago
Downloads: 131
Rating: (0 Votes)

Tumescence—the process by which the organism is brought into the physical and psychic state necessary to insure conjugation and detumescence—to some extent comes about through the spontaneous action of internal forces. To that extent it is analogous to the physical and psychic changes which accompany the gradual filling of the bladder and precede its evacuation. But even among animals who are by no means high in the zoölogical scale the process is more complicated than this. External stimuli act at every stage, arousing or heightening the process of tumescence, and in normal human beings it may be said that the process is never completed without the aid of such stimuli, for even in the auto-erotic sphere external stimuli are still active, either actually or in imagination.

The chief stimuli which influence tumescence and thus direct sexual choice come chiefly—indeed, exclusively—through the four senses of touch, smell, hearing, and sight. All the phenomena of sexual selection, so far as they are based externally, act through these four senses. The reality of the influence thus exerted may be demonstrated statistically even in civilized man, and it has been shown that, as regards, for instance, eye-color, conjugal partners differ sensibly from the unmarried persons by whom they are surrounded. When, therefore, we are exploring the nature of the influence which stimuli, acting through the sensory channels, exert on the strength and direction of the sexual impulse, we are intimately concerned with the process by which the actual form and color, not alone of living things generally, but of our own species, have been shaped and are still being shaped. At the same time, it is probable, we are exploring the mystery which underlies all the subtle appreciations, all the emotional undertones, which are woven in the web of the whole world as it appeals to us through those sensory passages by which alone it can reach us. We are here approaching, therefore, a fundamental subject of unsurpassable importance, a subject which has not yet been accurately explored save at a few isolated points and one which it is therefore impossible to deal with fully and adequately. Yet it cannot be passed over, for it enters into the whole psychology of the sexual instinct.

Of the four senses—touch, smell, hearing, and sight—with which we are here concerned, touch is the most primitive, and it may be said to be the most important, though it is usually the last to make its appeal felt. Smell, which occupies the chief place among many animals, is of comparatively less importance, though of considerable interest, in man; it is only less intimate and final than touch. Sight occupies an intermediate position, and on this account, and also on account of the very great part played by vision in life generally as well as in art, it is the most important of all the senses from the human sexual point of view. Hearing, from the same point of view, is the most remote of all the senses in its appeal to the sexual impulse, and on that account it is, when it intervenes, among the first to make its influence felt.

Taste must, I believe, be excluded, for if we abstract the parts of touch and smell, even in those abnormal sexual acts in which it may seem to be affected, taste could scarcely have any influence. Most of our "tasting," as Waller puts it, is done by the nose, which, in man, is in specially close relationship, posteriorly, with the mouth. There are at most four taste sensations—sweet, bitter, salt, and sour—if even all of these are simple tastes. What commonly pass for taste sensations, as shown by some experiments of G. T. W. Patrick (Psychological Review, 1898, p. 160), are the composite results of the mingling of sensations of smell, touch, temperature, sight, and taste.

The Primitive Character of the Skin—Its Qualities—Touch the Earliest Source of Sensory Pleasure—The Characteristics of Touch—As the Alpha and Omega of Affection—The Sexual Organs a Special Adaptation of Touch—Sexual Attraction as Originated by Touch—Sexual Hyperæsthesia to Touch—The Sexual Associations of Acne.