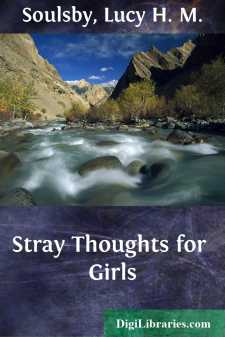 LINES WRITTEN ON BEING TOLD THAT A LADY WAS "PLAIN AND COMMONPLACE."

You say that my love is plain,      But that I can never allow    When I look at the thought for others      That is written on her brow.

Nothing to say for herself,      That is the fault you find!    Hark to her words to the children,      Cheery and bright and kind.

A FAREWELL BIBLE LESSON TO GIRLS ON LEAVING SCHOOL.

It would be interesting to make a "Garden of Women" from the poets, collecting the pictures of "Fair Women" they have drawn for us, but I want to consider specially the ideal woman of that ancient poet Solomon, and to see how far she can be translated into modern life.

The subject ought to be considered by you who are leaving a school you have loved and valued, and which you should commend to the world, by showing that it has made you fit for home. Beaumaris School has a blank shield for its arms, with the motto, "Albam exorna," "Adorn the white;" you are all starting with white shields, and you can adorn the white: it is not only in Spenser that we find Britomarts. You are as much a band of champions as were King Arthur's Knights; you have all the same enemy, have made the same vows, and for a year have been in fellowship, learning and practising the same lessons: can you help feeling that there is a responsibility laid on you, to see that the world shall be the better because of you? Be like Sir Galahad with his white shield on which "a bloody cross" was signed, when he had fought and won.

You know that I admire the old-fashioned type of woman—the womanly woman,—and you will not suspect me of wishing you to start off "on some adventure strange and new," but I do want you not to be content to lead a commonplace life; you must, anyway, live your life: resolve that by God's grace you will live it nobly. You cannot alter the outward form of your life,—you will probably be surrounded by very commonplace household duties, and worries, and jars,—but you can be like King Midas, whose touch turned the most common things to gold....