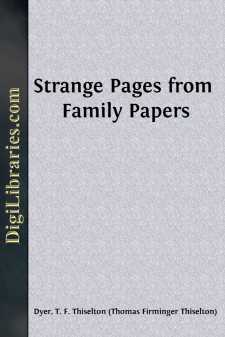 CHAPTER I. FATAL CURSES. May the grass wither from thy feet! the woodsDeny thee shelter! Earth a home! the dustA grave! The sun his light! and heaven her God. Byron, Cain.

Many a strange and curious romance has been handed down in the history of our great families, relative to the terrible curses uttered in cases of dire extremity against persons considered guilty of injustice and wrong doing. It is to such fearful imprecations that the misfortune and downfall of certain houses have been attributed, although, it may be, centuries have elapsed before their final fulfilment. Such curses, too, unlike the fatal "Curse of Kehama," have rarely turned into blessings, nor have they been thought to be as harmless as the curse of the Cardinal-Archbishop of Rheims, who banned the thief—both body and soul, his life and for ever—who stole his ring. It was an awful curse, but none of the guests seemed the worse for it, except the poor jackdaw who had hidden the ring in some sly corner as a practical joke. But, if we are to believe traditionary and historical lore, only too many of the curses recorded in the chronicles of family history have been productive of the most disastrous results, reminding us of that dreadful malediction given by Byron in his "Curse of Minerva":

"So let him stand, through ages yet unborn,Fix'd statue on the pedestal of scorn."

A popular form of curse seems to have been the gradual collapse of the family name from failure of male-issue; and although there is, perhaps, no more romantic chapter in the vicissitudes of many a great house than its final extinction from lack of an heir, such a disaster is all the more to be lamented when resulting from a curse. A catastrophe of this kind was that connected with the M'Alister family of Scotch notoriety. The story goes that many generations back, one of their chiefs, M'Alister Indre—an intrepid warrior who feared neither God nor man—in a skirmish with a neighbouring clan, captured a widow's two sons, and in a most heartless manner caused them to be hanged on a gibbet erected almost before her very door. It was in vain that, with well nigh heartbroken tears, she denounced his iniquitous act, for his comrades and himself only laughed and scoffed, and even threatened to burn her cottage to the ground. But as the crimson and setting rays of a summer sun fell on the lifeless bodies of her two sons, her eyes met those of him who had so basely and cruelly wronged her, and, after once more stigmatizing his barbarity, with deep measured voice she pronounced these ominous words, embodying a curse which M'Alister Indre little anticipated would so surely come to pass. "I suffer now," said the grief-stricken woman, "but you shall suffer always—you have made me childless, but you and yours shall be heirless for ever—never shall there be a son to the house of M'Alister."

These words were treated with contempt by M'Alister Indre, who mocked and laughed at the malicious prattle of a woman's tongue. But time proved only too truly how persistently the curse of the bereaved woman clung to the race of her oppressors, and, as Sir Bernard Burke remarks, it was in the reign of Queen Anne that the hopes of the house of M'Alister "flourished for the last time, they were blighted for ever." The closing scene of this prophetic curse was equally tragic and romantic; for, whilst espousing the cause of the Pretender, the young and promising heir of the M'Alisters was taken prisoner, and with many others put to death....