Story of Orestes A Condensation of the Trilogy 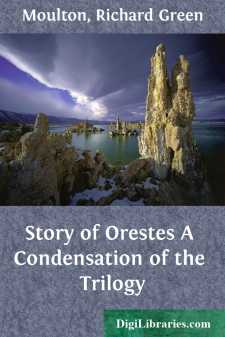 The Sacred Legends touched by this Trilogy would be familiar, in outline, to the Auditors: e. g.:

The woes of the House of Atreus: the foundation of them laid by Atreus when, to take vengeance on his brother Thyestes, he served up to him at a banquet the flesh of his own sons;

His grandsons were Agamemnon and Menelaus: Menelaus' wife, Helen, was stolen by a guest, Paris of Troy, which caused the great Trojan war.

Agamemnon, who commanded the Greek nations in that war, fretting at the contrary winds which delayed the setting out of the fleet, was persuaded by the Seers to slay his own daughter Iphigenia, to appease the Deities;

Her mother Clytaemnestra treasured up this wrong all through the ten years' war, and slew Agamemnon on his return, in the moment of victory, slew him while in his bath by casting a net over him and smiting him to death with her own arm;

Then she reigned in triumph with Aegisthus her paramour (himself one of the fatal house), till Orestes her son, who had escaped as an infant when his father was slaughtered, returned at last, and slew the guilty pair;

For this act of matricide, though done by the command of Apollo, Orestes was given up to the Furies, and driven over the earth, a madman, till in Athens, on Mars' Hill they say, he was cleansed and healed.

Cassandra too was involved in the fall of Agamemnon: the Trojan maiden beloved of Apollo, who bestowed upon her the gift of prophecy; when she slighted the God's love, Apollo—for no gift of a god can be recalled—left her a prophetess, with the doom that her true forebodings should ever be disbelieved. She, having thus vainly sought to save Troy, with its fall fell into captivity, and to the lot of Agamemnon, with whom she died.

The name of Orestes would suggest the proverbial friendship of Qrestes [Transcriber's note: Orestes?] and Pylades, formed in Orestes' trouble and never broken.

TRILOGY OF THE ORESTEIA FIRST PLAY: IN THE MORNING: AGAMEMNON PROLOGUE

The Permanent Scene is decorated to represent the facade of the Palace of Agamemnon, at Argos; the platform over the Central door appearing as a Watch-tower. At intervals along the front of the Palace, and especially by the three doors, are statues of Gods, amongst them Apollo, Zeus, and Hermes. The time is supposed to be night, verging on morning. Both Orchestra and Stage are vacant: only a Watchman is discovered on the Tower, leaning on his elbow, and gazing into the distance.

The Watchman soliloquizes on his toilsome task of watching all night through for the first sight of the signal which is to tell of the capture of Troy: he has kept his post for years, till the constellations which usher in winter and harvest-time are his familiar companions; he must endure weather and sleeplessness, and when he would sing to keep his spirits up he is checked by thoughts of his absent master's household, in which, he darkly hints, things are "not well." [He is settling himself into an easier posture, when suddenly he springs to his feet.] The beacon-fire at last!...