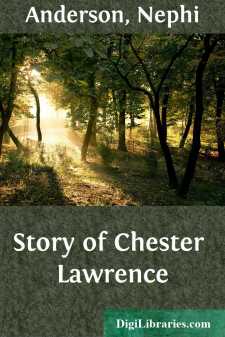 It was raining when the ship was ready to sail; yet on the pier a large crowd of people stood under dripping umbrellas, waving and shouting farewells to their friends on board. The departing passengers, most of them protected by an upper deck, pressed four deep against the rail, and waved and shouted in return.

The belated passenger, struggling with heavy hand baggage, scrambled up the gang-plank. The last visitors were hustled ashore; amid noise and bustle, the plank was drawn away, and the ship was clear. A tremor ran through the vessel as the propeller began to move, and soon there was a strip of water between the pier and the ship. Then a tiny tug-boat came alongside, fastened itself to the steamer, and with calm assurance, guided its big brother safely into the harbor and down the bay. The people on shore merged into one dark object; the greetings became indistinct; the great city itself, back of the pier, melted into a gray mass as seen through the rain.

Chester Lawrence stood on the deck of the departing vessel and watched the interesting scene. He stood as one apart from the crowd, having no portion with either those on board or those left behind. He was a spectator only. Not a soul in that mass of humanity on the pier, not one in the big city, knew Chester Lawrence or had a thought for him. No one cared whether his voyage would be pleasant or otherwise. There were no tears for him, or fears that he would not return in safety. Of the hundreds of waving handkerchiefs, none was meant for him; but as a last show of good-fellowship and as a farewell greeting to his native land, Chester waved once with the rest.

The rain continued as the ship dropped down the bay and came safely into the open sea. Some of the passengers then hurried below, while others lingered on deck to see as long as possible the fast-receding land. Chester took his time. He had seen that his grips had been safely stowed away in his state room, so he had no worries, as others seemed to have, regarding his belongings. The ship hands (sailors they cannot now be called) were busy clearing the deck and getting things into their proper places. The vessel pointed fairly into the vast eastern sea. The land became a dark, fast-thinning line on the western horizon, and then even that was swallowed up in the mist of rain.

"Well, good-by, old home, good-by thou goodly Land of Joseph," spoke Chester, half aloud, as he stood for one intense moment facing the west, then turned to go down into his room. The rain must at last have reached him for his eyes were so blurred that he bumped rather abruptly into an elderly man who was standing at his elbow.

"It was nothing, sir. I, too, was just bidding farewell to the Land of Joseph, and I fear my sight was also rather dim."

Chester paused and looked at the man who had heard and repeated his remark. No one but a Latter-day Saint would call America the Land of Joseph. He was a pleasant-looking man, with hair and beard tinged with gray, clear blue eyes, a firm mouth, about which at that moment there played a faint smile....