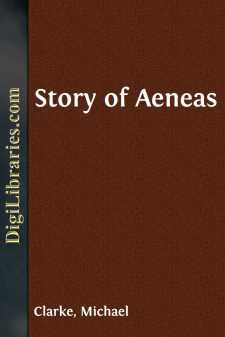 I. VERGIL, THE PRINCE OF LATIN POETS.

The story of AE-ne'as, as related by the Roman poet Ver'gil in his celebrated poem called the AE-ne'id, which we are to tell about in this book, is one of the most interesting of the myths or legends that have come down to us from ancient authors.

Vergil lived in the time of the Roman Emperor Au-gus'tus (63 B. C.—14 A. D.), grand-nephew and successor of Ju'li-us Cae'sar. Augustus and his chief counsellor or minister Mae-ce'nas, gave great encouragement to learning and learned men, and under their liberal patronage arose a number of eminent writers to whose works has been given the name of classics, as being of the highest rank or class. The period is known as the Augustan Age, a phrase also used in reference to periods in the history of other countries, in which literature reached its highest perfection. Thus the reign of Queen Anne (1702-1714) is called the Augustan age of English literature, because of the number of literary men who flourished in England in that period, and the excellence of their works.

Vergil was the greatest of the poets of ancient Rome, and with the exception of Ho'mer, the greatest of the poets of antiquity. From a very early period, almost from the age in which he lived, he was called the Prince of Latin Poets. His full name was Pub'li-us Ver-gil'i-us Ma'ro. He was born about seventy years before Christ, in the village of An'des (now Pi-e'to-le), near the town of Man'tu-a in the north of Italy. His father was the owner of a small estate, which he farmed himself. Though of moderate means, he gave his son a good education. Young Vergil spent his boyhood at school at Cre-mo'na and Milan. He completed his studies at Naples, where he read the Greek and Latin authors, and acquired a knowledge of mathematics, natural philosophy, and medical science. He afterwards returned to Mantua, and resided there for a few years, enjoying the quiet of country life at the family homestead.

About this time the Emperor Augustus was engaged in a war against a powerful party of his own countrymen, led by a famous Roman named Bru'tus. In the year 42 B.C. he defeated Brutus in a great battle, which put an end to the war. He afterwards rewarded many of his troops by dividing among them lands in the neighborhood of Mantua, and in other parts of Italy, dispossessing the owners for having sided with his enemies. Though Vergil had taken no part in the struggle, his farm was allotted to one of the imperial soldiers. But this was the beginning of his greatness. Through the friendship of the governor of Mantua, he was introduced to Maecenas, and afterwards to Augustus, who gave orders that his property should be restored to him.

Thus Vergil became known to the first men of Rome. He expressed his gratitude to the emperor in one of a series of poems called Pastorals or Bu-col'ics, words which mean shepherds' songs, or songs descriptive of life in the country. These poems, though among Vergil's earliest productions, were highly applauded in Rome. They were so much esteemed that portions of them were recited in the theatre in the author's presence, and the audience were so delighted that they all rose to their feet, an honor which it was customary to pay only to Augustus himself....