Stories of the Wagner Opera 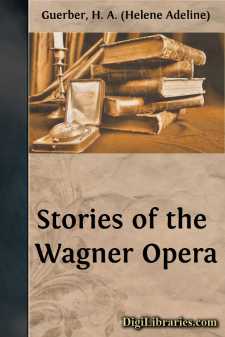 RIENZI,THE LAST OF THE TRIBUNES.

Wagner was greatly troubled in the beginning of his career about the choice of subjects for his operas. His first famous work, ‘Rienzi,’ is founded upon the same historical basis as Bulwer's novel bearing the same name, and is a tragic opera in five acts. The composer wrote the poem and the first two acts of the score in 1838, during his residence at Riga, and from there carried it with him to Boulogne. There he had an interview with Meyerbeer, after his memorable sea journey. Wagner submitted his libretto and the score for the first acts to that famous composer, who is reported to have said, ‘Rienzi is the best opera-book extant,’ and who gave him introductions to musical directors and publishers in Paris. In spite of this encouraging verdict on Meyerbeer's part, Wagner soon discovered that there was no chance of success for ‘Rienzi’ in France, and, after completing the score while dwelling at Meudon, he forwarded it in 1841 to Dresden. Here the opera found friends in the tenor Tichatscheck and the chorus-master Fisher, and when it was produced in 1842 it was received with great enthusiasm. The opera, which gave ample opportunity for great scenic display, was so long, however, that the first representation lasted from six o'clock to midnight. But when Wagner would fain have made excisions, the artists themselves strenuously opposed him, and preferred to give the opera in two successive evenings. At the third representation Wagner himself conducted with such success that ‘he was the hero of the day.’ This great triumph was reviewed with envy by the admirers of the Italian school of music, and some critics went so far in their partisanship as to denounce the score as ‘blatant, and at times almost vulgar.’ Notwithstanding these adverse criticisms, the opera continued to be played with much success at Dresden, and was produced at Berlin some years later, and at Vienna in 1871.

As Wagner's subsequent efforts have greatly surpassed this first work, ‘Rienzi’ is not often played, and has seldom been produced in America, I believe owing principally to its great length. The scene of ‘Rienzi’ is laid entirely in the streets and Capitol of Rome, in the middle of the fourteenth century, when the city was rendered unsafe by the constant dissensions and brawls among the noble families. Foremost among these conflicting elements were the rival houses of Colonna and Orsini, and, as in those days each nobleman kept an armed retinue within a fortified enclosure in town, he soon became a despot. Fearing no one, consulting only his own pleasure and convenience, he daily sallied forth to plunder, kidnap, and murder at his will. Such being the state of affairs, the streets daily flowed with blood; the merchants no longer dared open their shops and expose their wares lest they should be summarily carried away, and young and pretty women scarcely dared venture out of their houses even at noonday, lest they should be seen and carried away by noblemen.

Terrified by the lawlessness of the barons, whom he could no longer control, the Pope left Rome and took refuge at Avignon, leaving the ancient city a helpless prey to the various political factions which were engaged in continual strife....