Stories of the Saints by Candle-Light 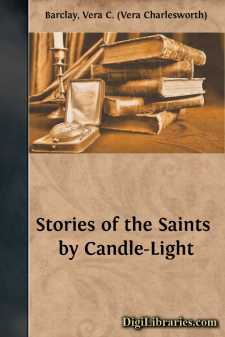 Once upon a time there were fifteen Cubs who spent nine wonderful days in camp. They were London Cubs, and the camp was on a beautiful little green island whose rocky shore ran down in green, tree-covered points into the bluest sea you ever saw. These nine days were the most splendid days in those Cubs' lives. And so they often think of them, and dream about them, and live them over again in memory.

So that they may more easily go over those days their Old Wolf has written down all about them in this book. Perhaps other Cubs will like to come away, in imagination, to that fair, green island, and so have a share in the nine days.

Now, one of the very "special things" about those days in camp were the candle-light stories which the Cubs listened to every night, seated in a big, happy pile, pyjama-clad, on their palliasses. All day they used to look forward to those stories, and sometimes, in the middle of a shrimping expedition, or a paddling party, one or another would remark, "Story to-night, boys!" and turn his thumbs up to show he was pleased at the thought. And so you will find the candle-light stories, too, in this book; and remember that all the stories in this book are true—both those about the Cubs and those about the Saints.

THE FIRST DAY The train steamed slowly out of Victoria Station. "Now we're off!" shouted a Cub, and he and all the others began to jump for joy, which was not easy in a railway compartment packed like a sardine-tin. Then someone began to sing the Pack chorus, and everyone joined in with all their strength: Let the great big world keep turning,Now I've joined a Wolf Cub Pack;And I only knowThat I want to goTo camp—to camp—to camp!Oh, I long to set off marchingWith my kit-bag on my back.Let the great big world keep on turning round,Now I've joined a Wolf Cub Pack!

Then someone yelled "Are we down-hearted?" and the Cubs yelled "No!" so loudly that Akela thought she would be deafened for life.

Presently the train ran out into the country, and plodded along between woods and fields. And the early morning sun shone brightly, and the sky was very blue. The country, the country! And, very soon, the sea! There were some of them who had never been to the country, and "Spongey," the youngest of the party, had never even been in a real train.

"Talk about hot!" said someone, panting, when the train had thundered on for about an hour. And, my word, it was hot! Besides, there were blacks and dust, and everyone began to get very grimy—specially the people who were eating bread-and-jam and sticky fruit, and the people who had to crawl under the seat to pick up things that had got lost.

"Never mind," said Akela, "we shall be in the sea this evening, and then we shall be cool."

That started everyone jumping for joy again, of course.

Presently the train passed Arundel Castle—its white towers and turrets and battlements rising up amidst the dark green woods like an enchanted castle in the days of knights and fairies—and the Cubs learnt that there are castles in real life as well as in story-books....