Stories from the Greek Tragedians 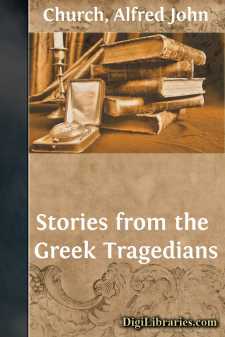 The Story Of The Love Of Alcestis.

Asclepius, the son of Apollo, being a mighty physician, raised men from the dead. But Zeus was wroth that a man should have such power, and so make of no effect the ordinance of the Gods. Wherefore he smote Asclepius with a thunderbolt and slew him. And when Apollo knew this, he slew the Cyclopés that had made the thunderbolts for his father Zeus, for men say that they make them on their forges that are in the mountain of Etna. But Zeus suffered not this deed to go unpunished, but passed this sentence on his son Apollo, that he should serve a mortal man for the space of a whole year. Wherefore, for all that he was a god, he kept the sheep of Admetus, who was the Prince of Pheræ in Thessaly. And Admetus knew not that he was a god; but, nevertheless, being a just man, dealt truly with him. And it came to pass after this that Admetus was sick unto death. But Apollo gained this grace for him of the Fates (which order of life and death for men), that he should live, if only he could find some one who should be willing to die in his stead. And he went to all his kinsmen and friends and asked this thing of them, but found no one that was willing so to die; only Alcestis his wife was willing.

And when the day was come on the which it was appointed for her to die, Death came that he might fetch her. And when he was come, he found Apollo walking to and fro before the palace of King Admetus, having his bow in his hand. And when Death saw him, he said—

"What doest thou here, Apollo? Is it not enough for thee to have kept Admetus from his doom? Dost thou keep watch and ward over this woman with thine arrows and thy bow?"

"Fear not," the god made answer, "I have justice on my side."

"If thou hast justice, what need of thy bow?"

"Ay, and it is thy wont to help this house beyond all right and law."

"Nay, but I was troubled at the sorrows of one that I loved, and helped him."

"I know thy cunning speech and fair ways; but this woman thou shalt not take from me."

"But consider; thou canst but have one life. Wilt thou not take another in her stead?"

"Her and no other will I have, for my honour is the greater when I take the young."

"I know thy temper, hated both of Gods and of men. But there cometh a guest to this house, whom Eurystheus sendeth to the snowy plains of Thrace, to fetch the horses of Lycurgus. Haply he shall persuade thee against thy will."

"Say what thou wilt; it shall avail nothing. And now I go to cut off a lock of her hair, for I take these firstfruits of them that die."

In the meantime, within the palace, Alcestis prepared herself for death. And first she washed her body with pure water from the river, and then she took from her coffer of cedar her fairest apparel, and adorned herself therewith. Then, being so arranged, she stood before the hearth and prayed, saying, "O Queen Heré, behold! I depart this day. Do thou therefore keep my children, giving to this one a noble husband and to that a loving wife." And all the altars that were in the house she visited in like manner, crowning them with myrtle leaves and praying at them....