Stories about the Instinct of Animals, Their Characters, and Habits 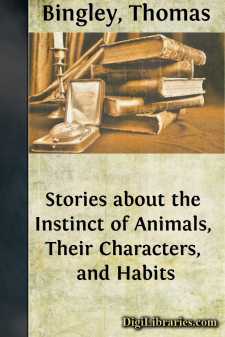 Uncle Thomas introduces to the Notice of the Young Folks the Ettrick Shepherd's Stories about Sheep; and tells them some Interesting Stories about the Goat, and its Peculiarities.

"I dare say, Boys, you have not forgotten the Ettrick Shepherd's wonderful stories about his dogs. Some of those which he relates about sheep are equally remarkable, and as he tells them in the same pleasing style, I think I cannot do better than read to you the chapter in 'The Shepherd's Calendar' which he devotes to this animal."

"Thank you, Uncle Thomas. We remember very well his stories about Sirrah and Hector and Chieftain, and the old Shepherd's grief at parting with his dog."

"That's right, Boys; I am pleased to think that you do not forget what I tell you. But listen to the Ettrick Shepherd."

"The sheep has scarcely any marked character save that of natural affection, of which it possesses a very great share. It is otherwise a stupid indifferent animal, having few wants, and fewer expedients. The old black-faced, or forest breed, have far more powerful capabilities than any of the finer breeds that have been introduced into Scotland, and, therefore, the few anecdotes that I have to relate shall be confined to them.

"So strong is the attachment of the sheep to the place where they have been bred, that I have heard of their returning from Yorkshire to the Highlands. I was always somewhat inclined to suspect that they might have been lost by the way, but it is certain, however, that when once one or a few sheep get away from the rest of their acquaintances, they return homeward with great eagerness and perseverance. I have lived beside a drove-road the better part of my life, and many stragglers have I seen bending their steps northward in the spring of the year. A shepherd rarely sees these journeyers twice; if he sees them, and stops them in the morning, they are gone long before night; and if he sees them at night they will be gone many miles before morning. This strong attachment to the place of their nativity is much more predominant in our old aboriginal breed than in any of the other kinds with which I am acquainted.

"The most singular instance that I know of, to be quite well authenticated, is that of a black ewe, that returned with her lamb from a farm in the head of Glen-Lyon, to the farm of Harehope, in Tweeddale, and accomplished the journey in nine days. She was soon missed by her owner, and a shepherd was despatched in pursuit of her, who followed her all the way to Crieff, where he turned, and gave her up. He got intelligence of her all the way, and every one told him that she absolutely persisted in travelling on,—she would not be turned, regarding neither sheep nor shepherd by the way. Her lamb was often far behind, and she had constantly to urge it on by impatient bleating. She unluckily came to Stirling on the morning of a great annual fair, about the end of May, and judging it imprudent to venture through the crowd with her lamb, she halted on the north side of the town the whole day, where she was seen by hundreds, lying close by the road-side....